How should you pass-by a ladder on a pavement?  Walk underneath, and risk something falling, or walk around and risk being run-over by a car?

Look For Their Hands! 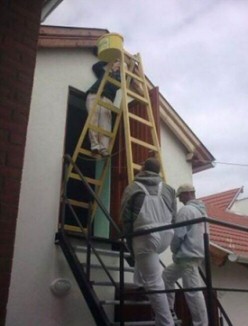 At first I could not see anything wrong, then I saw how the two workmen in white were holding the ladder. 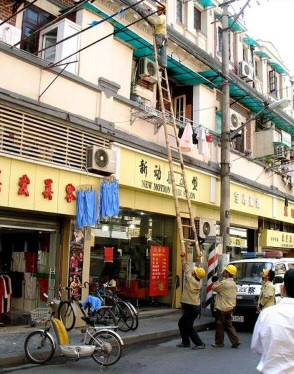 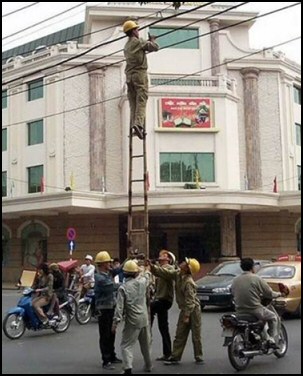 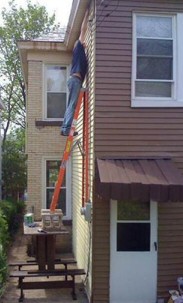 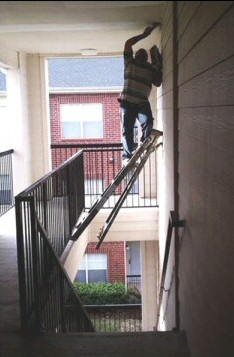 We Fear for These Electricians on Their Ladders 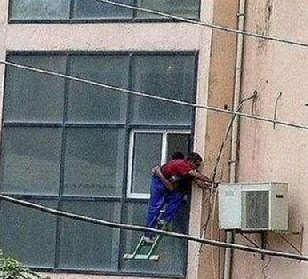 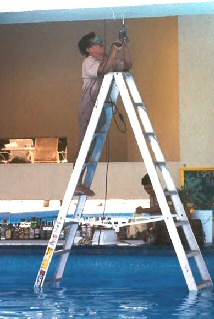 On the Roof - A Brief Funny Tale

Marcus runs into the house shouting, 'Mum, I've knocked the ladder down outside.'

His mother replies, 'Well, don't bother me, go and tell your dad.'

Marcus says, 'He already knows - he's hanging off the roof.'

One evening, a resident of Bakersfield, a small rural town in the USA, called the local volunteer fire department to request assistance in removing her cat from a tree.

Since this was a "questionable" call, the fire control dispatcher called the fire chief at home to ask if he wanted to respond. The chief said sure, call out the department, since it was early evening and it shouldn't be a problem for the volunteers to respond.

The fire department responded with a rescue truck which had an extension ladder.

The tree, however, was too tall and willowy to support the weight of the extension ladder. Rather than send men back to the fire hall to bring the aerial ladder truck, one of the fire-fighters suggested an alternate course of action. Two of the fire-fighters supported the ladder while a third climbed high enough to tie a rope around the tree at about half its height.

The other end of the rope was tied to a trailer hitch on a pickup truck, with the truck slowly driven forward, forcing the tree to bend over.
One fire-fighter was poised to grab the cat as soon as it was within his reach. The knot securing the rope to the trailer hitch slipped free. 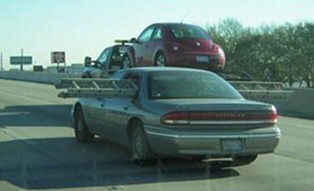 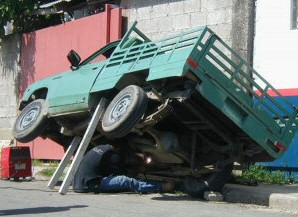 The Hod Carrier - A Hilarious Story

Flanagan was working so hard on a building site carrying bricks up the ladder that his mate, Paddy, got worried.

'What's up with you, working so hard?' Paddy asks.

'Don't worry,' replies Flanagan, I've got them all fooled.  It's the same load of bricks each time.' 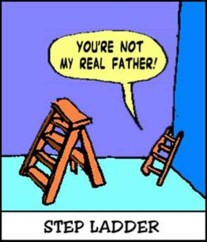 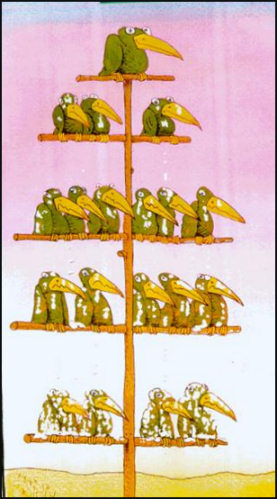 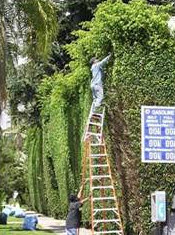 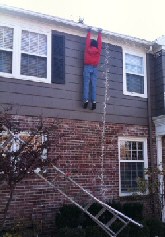 The other night I dreamed that I had died and gone to Heaven. At the Pearly Gates I was met by Saint Peter who told me if I wanted to enter the gates of Heaven I must climb that ladder one rung at a time.

On each rung I must write a sin that I committed during my life while on earth.  He then gave me a piece of chalk. I started, writing, climbing, writing, climbing; hanging on with one hand and writing with the other is a difficult task for someone who does not like heights.

All of a sudden, something was crushing the fingers of my holding hand. I looked up, and there, much to my amazement, was my boss coming down the ladder for more chalk.

Silly Ladder Question - Ah, but do you know the answer?

A rope ladder is hanging over the side of a ship.  The ladder is 12 feet long, and the rungs are one foot apart. The lowest rung is resting on the top of the ocean.  The tide rises at the rate of 18 inches per hour. How long will it take before the first four rungs of the ladder are under water?

e) The rungs will never be under water.

The point is that the boat is floating, and the ladder hangs off the side!