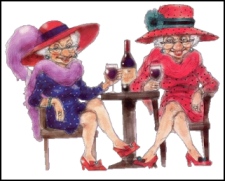 A light hearted look at marriage and romance.
Suitable wedding jokes to incorporate into your speech.

The oldest recorded exchange of wedding rings can be traced to ancient Egypt,
about 4,500 years ago.

In mathematics you don't understand things. You just get used to them.  Johann von Neumann

Three older ladies were discussing the problems of getting older. One said, 'Sometimes I catch myself with a jar of mayonnaise in my hand, in front of the refrigerator, and can't
remember whether I need to
put it away, or start making a sandwich'.

The second lady chimed in, 'Yes, sometimes I find myself standing on the stairs and can't
remember whether I was on my way up or on my way down.'

The third one
responded, 'Well, I am glad I don't
have that problem; knock on wood, 'as she rapped her knuckles on the table.  She looked up and said, 'That must be the door, I'll get it!'

They say that marriage makes a man dizzy, and it's true.

As soon as I got a wife, I lost my balance at the bank.

Question: Why do women live longer than men?

A Saudi man is in hospital after his divorced parents forced him to marry four times within six months. The battle began when the father
insisted the boy should marry a girl from his side of the family.  The mother retaliated by ordering him to wed a girl from her side, reports Arab News quoting Al-Watan daily. But the father
wasn't
happy with the balance of power and insisted on a third wife from his side, to show who was boss.

The mother, not to be outdone, then demanded that her son include another wife from her side of the family.  The son has now been
admitted to a hospital for psychological treatment.  He is refusing to see his parents or his wives.

Perhaps this is not a wedding joke to incorporate in your speech!

Does Your Husband Love You?

There was a group of women at a seminar on how to live in a loving
relationship with your husband. The women were asked, 'How many of you love
your husbands?' All the women raised their hands.

Then they were asked, 'When was the last time you told your husband you
loved him?'  Some women answered today, some yesterday, some didn't
remember.  The women were then told to take their cellphones and send
the following text: I love you, sweetheart.

Then the women were told to exchange phones and read the responding text
messages.

Here are ten of the replies:

When asked if there was anything they would have changed about one of the
most romantic moments of their lives, several women said a 'bigger diamond!'

Footnotes:
Please send us your Mathematics of Marriage.

Beauty is in the eye of the beholder, and it may be necessary from time
to time to give a stupid or misinformed beholder a black eye. Miss Piggy