Before the internet and before television, people had to make their
own entertainment.  One lesser know hobby was sending post cards from unusual
place names.  Here are a few ideas for romantic locations where you may like to stay, or just send a card to get the postmark.

Note: If you have a Valentine's location near you, then please send it to us. 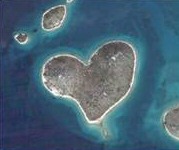 A tiny heart-shaped island in the Adriatic Sea has become a holiday hit
for St Valentine's Day after being discovered on Google Earth.  Even the
uninhabited island's owner didn't realise how perfectly heart-shaped the
island off the Croatian coast was until he was swamped with requests from
lovers to stay there.

'It has been incredible. We think it is the most perfect heart-shaped
island in the world,' said Vlado Juresko, whose family owns the 130,000
square yard islet of Galesnjak, hastily renamed "Lovers' Island". 'Nobody
lives there so if lovers really do want to spend time alone it's the perfect
desert island. We always thought it looked a bit like a heart but since it's
been on Google Earth everyone else has seen it too and the whole world seems
to want to stay here.'

A Saudi man is in hospital after his divorced parents forced him to marry four times within six months. The battle began when the father insisted the boy should marry a girl from his side of the family.

The mother retaliated by ordering him to wed a girl from her side, reports Arab News quoting Al-Watan daily.

But the father wasn't
happy with the balance of power and insisted on a third wife from his
side, to show who was boss.

The mother, not to be outdone, then demanded that her son include another wife from her side of the family.

The son has now been admitted to a hospital for psychological
treatment. He is refusing to see his parents or his wives. 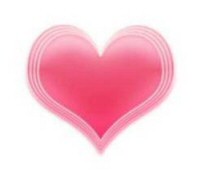 Traditionally, leap years in general and leap days in particular are a time when
women break with tradition and propose to men.  So, be in the right
location at the right time.

To modern mankind, leap days and leap years make sense.  Unlike our
ancient ancestors, we realise that there are 365 and a quarter days in a year.
Thus we get used to the idea that ever four years there will be an extra day
called the 29th of February.

A year is the time it takes the earth to orbit the sun.  Moreover, a
year brings with it the concepts of repeating seasons and fluctuating day
length.  Indeed, it was not that long ago when wise men thought that sun
orbited the earth, even worse those who believed the earth was spherical and not
flat would have been confined to a lunatic asylum.

Back to the problem of that leap day the 29th of February.  The day is
the time it takes the earth to rotate on it's own axis, it is such a wonderful
and logical measurement of time that we don't want to mess with it.  It
makes no sense to make one day equal to 24 hrs and one minute, just to match
with the 365 1/4 days it takes to orbit the sun.

If such a stupid idea ever gained acceptance it would mean that every two
years 'Midnight' 0:00 would be at high noon.  Yet if every day was
precisely 24:00:00 and there were no leap years we get a new form of madness,
January the 1st would eventually occur at the spring equinox.

Early attempts by Romans to fix leap years every four years worked well
enough during their life time, but eventually the calendar suffered from the
fact that the award of leap years was based on imprecise calculation.

The fundamental problem is that the earth does not orbit the the sun in an
exact number of day, instead the period is 365.24219 days.  The point is
that if you have a leap year every 4 years eventually you will observe an error.
In itself, the error of 1 day in 138 years seems insignificant, but after 1,500
years Pope Gregory decided it was time to do something about the accumulated 11
day anomaly.

Then when a correction is made to the calendar after centuries of ignoring
the leap day, people become upset.  This actually happened in the 16th
century when governments switched from the old Julian calendar to the modern
Gregorian calendar with it's leap days every 4 years.  To make the
correction, the governments had to 'lose' 11 days.

Footnote:
Please send us your funny Valentine names
of locations.