Here is our collection of amusing images taken from the sides of lorries.

What have we got here?  A burnt-out lorry?

This lorry is decked out with images printed on interchangeable covers.  Apparently, a German company called RollAd sponsored a competition to promote their new canvas advertising medium / material.

The Pepsi advert (above), was the winner of RollAd's
truck art competition
held at the Hockenheim Ring race track in October 2005.  These pictures are thumbnails, do click for even bigger pictures.

Funny Truck Art from the USA

Strange But True Tale
About a Truck Driver 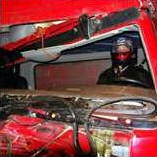 A Chinese truck driver, whose vehicle was wrecked in an accident, bought a
crash helmet and attempted to carry on his journey. Will and Guy have discovered
that a police patrol stopped the badly damaged, speeding, truck as it weaved
from side-to-side on a motorway outside Wuhan city. Officers were flabbergasted
when they saw the driver wearing his crash helmet in the crushed shell of his
cab. A police spokesman commented, 'We signalled the driver to stop immediately,
and he told us he had to continue, since he was under contract and had a very
tight schedule.'

The driver, Mr Zhao, of Wuhan city, told them he had an accident not long
after setting off to deliver vegetables to Hunan province, 'I found the truck
was still functional, so I bought myself a helmet and continued,' he told the
Changjiang Business Daily. 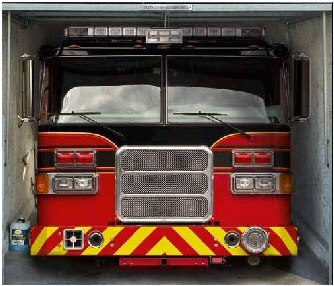 We have discovered that a German firm called "Style Your Garage", creates
posters for garage doors that make it look as if it's actually showing the
interior of your garage, and what's in it - a truck!

Footnote:
Please send us your pictures of funny truck art.