What was Camelot famous for?  Its knight life!

Teacher Debbie Moon's first graders were discussing a picture of a family. One little boy in the picture had a different hair color than the other members. One of her students suggested that he was adopted. A little girl said, 'I know all about Adoption, I was adopted ...' 'What does it mean to be adopted?', asked another child. 'It means', said the girl, 'that you grew in your mommy's heart instead of her tummy!' Footnote: Adoption story kindly sent in by Beryl Wilson

A bus load of tourists arrives at Runnymede*. They gather around the guide who says, 'This is the spot where the barons forced King John to sign the Magna Carta.'

A fellow at the front of the crowd asks, 'When did that happen?' '1215, 'answers the guide. The man looks at his watch and says, 'Gee whiz - Just missed it by a half hour.' Footnote: *The Runneymede meadows are on the banks of the Thames, in the county of Berkshire, England.  Fortunately, the land is now owned and preserved by the National Trust.

Teacher: 'Jimmy........ who was Anne Boleyn?'  Jimmy: 'She was a flat-iron.' Teacher: 'What on earth do you mean?' Jimmy: 'Well, it says here in the history book, 'Henry VIII, having disposed of Catherine of Aragon, pressed his suit with Anne Boleyn.'
Archaeologist An archaeologist is a person whose career lies in ruins. 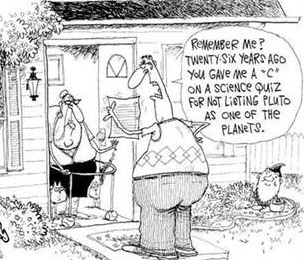 Richard, a fresher, at USC [University of Southern California] 'phoned his Mother one evening from his college room and asked her for some money because he was flat broke. His Mother sighed, 'OK, Richard. I will send you some money. Then she added, 'Oh by the way, you also left your economics book here when you visited two weeks ago. Do you want me to send that up too?' 'Ummm, oh yeah, you better, yes, OK,' Richard replied vaguely. So his Mum wrapped the book along with the cheques in a package, kissed Dad goodbye, and went to the post office to mail the money and the book. When she returned, Dad inquired, 'Well how much did you give the boy this time?' 'Oh, I wrote two cheques, one for 20 pesos, and the other for $1,000 out to him.' 'That's $1020!' yelled Dad, 'Are you mad, have you gone totally bonkers?' 'Don't worry darling,' Richard's Mother answered with a wide grin, 'I taped the 20 pesos cheque to the cover of his book, but I put the $1,000 one somewhere between the pages in chapter 19!'

Mr Peter Whittaker, a school teacher, injured his back playing soccer one holiday and had to wear a plaster cast around the upper part of his body for a week or so; it fitted under his shirt and was not noticeable at all. On the first day of the new term, still with the cast under his shirt, Mr Whittaker found himself assigned to the toughest students in Wallington School.  Walking confidently into the rowdy classroom, he opened the window as wide as possible and then busied himself with desk work.  When a strong breeze made his tie flap, Mr Whittaker took the desk stapler and stapled the tie to his chest. He had no trouble with discipline at Wallington School ever after.

The Lord's Prayer - Update by Rebecca

Carolyn was teaching her 3 year old daughter, Rebecca, the Lord's prayer. For several evenings at bedtime Rebecca repeated it after her mother. One night she said she was ready to solo.  Carolyn, as all mothers would, listened with pride as Rebecca carefully enunciated each word right up to the end, 'Lead us not into temptation' she prayed, 'but deliver us some e-mail, Amen.'

The greatest writer of the Renaissance was William Shakespeare. He was born in the year 1564, supposedly on his birthday. He never made much money and is famous only because of his plays. He wrote tragedies, comedies, and hysterectomies, all in Islamic pentameter. Romeo and Juliet are an example of a heroic couplet. Writing at the same time as Shakespeare was Miguel Cervantes. He wrote Donkey Hote. The next great author was John Milton. Milton wrote Paradise Lost. Then his wife died and he wrote Paradise Regained. Julius Caesar extinguished himself on the battlefields of Gaul. The Ids of March murdered him because they thought he was going to be made king. Dying, he gasped out: 'And you, you brute'

Will and Guy have found out that new computer software program has been developed that can tell jokes. The software is known as The System to Augment Non-speakers' Dialogue Using Puns [ acronym = Standup].The programme allows the youngsters to generate puns, helping them overcome language barriers. It has been developed by researchers at Aberdeen, Dundee and Edinburgh Universities and successfully trialled by eight pupils at a Glasgow school in Scotland. The system was created in response to research which found that computerised speech aids could restrict the development of a child's language skills as their speech tends to stick to the essentials and lacks spontaneity. The software creates the opportunity for puns using dictionaries and information about words. This enables children to amuse family and friends with jokes as the computer acts as a helper to the child, by letting them browse through joke forms and try out words and phrases.

What My Mother Taught Me

Footnote: We would be most interested in your funny teacher's tales.