I have the feeling that the punch line of this story will not be what you anticipate. Dave was one of my many ex-drinking companions; he was like a barrel, but shorter and wider.  Incidentally, we used to laugh at another of the company - John, because he could only manage 4 pints before slinking off home.  How times have changed, these days I never drink more that 2 pints. Back to Dave.  Dave was a diamond geezer, meaning he was a cockney, had a heart of gold, and as happens, lots of flash jewellery. What I liked most about Dave was listening to tales of his derring-do, his stories of driving - if driving is the word - a fork-lift digger. I drank with him every Sunday lunch time for about three years.  Now in those days in England, on a Sunday afternoon the pubs closed at 2:00 PM, or maybe it was 3:00 PM. Anyway, as far as drinking was concerned Dave talked so much at that when the barmaid called 'Time gentlemen please' , he had a minimum of 2 full pints on the bar. Every week I always believed he would fail, but every week he astonished me by draining both pints in about 2 minutes and this was after the full lunchtime session.

One Sunday, completely out of the blue, Dave said, 'Why don't we all go for a curry?  I know just the place' . I say again, that for 3 years the pattern had always been the same, just a Sunday lunchtime drink, a chat and then everyone home to their own Sunday dinner. Well, five of us accepted Dave's forceful invitation, and off we weaved off to the Taj Mahal Curry house.  When we arrived the waiter greeted Dave like a brother.  Next we were ushered to the top table and we all sat down.  Nothing out of the ordinary so far, but it was when the waiter brought the menus that something happened, which I will never forget; Dave said to his friend the waiter: 'Nah, nah, we don't need them menu's, just bring us 6 Chicken Bunas and 3 bottles of Blue Nun' . I was as they say, gob smacked.  Luckily, I did not mind chicken Buna curry and Blue Nun is not the worst white wine in the world. Postscript I am guessing now, but I bet you know someone like Dave who projects their thoughts, their ideas and their likes onto their friends and family.  Others may be a little more subtle than Dave, but now everywhere I go, I see examples of Dave and his order of, '6 Chicken Bunas please.'

Story About an Early Morning Drunk

Rodney and his wife Wilma are awakened at 3 o'clock early one Saturday morning by a loud pounding on the door.  Rodney gets up and goes to the door where he sees a drunken stranger, standing in the pouring rain. 'Give us a push' says the swaying stranger. 'Not a chance', says the husband, 'It is three o' clock in the morning.' He slams the door and returns to bed. 'Who was that?' asked his wife. 'Just some drunk guy asking for a push', he answers.

'Did you help him?' Wilma asks.  'No. I did not. It is three o' clock in the morning and it is pouring with rain outside. His wife said, 'Don't you remember about three months ago when we broke down and those two guys helped us? I think you should help him, and you should be ashamed of yourself. Rodney does as he is told, gets dressed and goes out into the pouring rain. He calls out into the dark, 'Hello! Are you still there? 'Yes', comes back the answer. 'Do you still need a push?' calls out Rodney.  'Yes. Please.' comes the reply from the darkness. 'Where are you?' asks Rodney.

'Over here on the swing', replies the drunk.

This is a familiar story about four people named Everybody, Somebody, Anybody, and Nobody.

Funny Story of the Egg Tattoo

This man has had a tattoo of a full breakfast created on his head.  He was selected after a plea for a volunteer.  Reports from BBC news online. 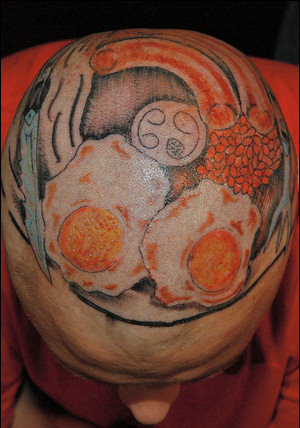 It took tattoo artist Blane Dickinson, 32, from Penmaenmawr, Conwy, Wales, six hours to complete the bacon, eggs, sausages, beans and with cutlery.  Volunteer Dwayne Gilbey, 19, from Coventry, said he wanted to take part in something different. Mr Dickinson said he next wanted to find someone willing to have their face tattooed on the back of their head. 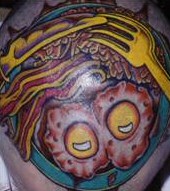 Mr Gilbey, who already has four tattoos, said, 'My friends and family keep asking me why I'm doing this. For me it's just something different which has never been done before. My mum is really unhappy about it and threatened to throw me out but I don't think she'll go through with it.' He volunteered for the tattooing, which took place at The Albion pub in Conwy. The tattooist added, 'I'm not charging Dayne but this tattoo would normally cost around £350 [USD$700] and must definitely be the most expensive breakfast he has ever had.' More Hilarious Short Stories