At the airline check in at London Heathrow, Guy has three bags. He puts them down and says to the young lady, 'I'd like you to send this one to Los Angeles, that one to Hong Kong and the last one to Durban.'  Her face shows signs of confusion before her training takes over and she says, 'I'm afraid we can't do that, sir.' 'Why not?' demands Guy, 'you did the last time I flew with you.'  I have the picture! 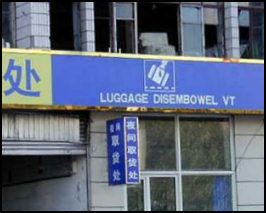 The situation: you are trying to book a flight online. Inadvertently, you insert the information in the wrong order, the Departure date is later than the Arrival date.  How does the system cope?  Well for one site this notice comes up on screen: 'Our system requires that you depart for your Destination before you arrive at it.' Footnote: The above snippet was kindly sent in by Junie.

After his return from Rome, Will couldn't find his luggage in the London Gatwick airport baggage area.  So he went to the lost luggage office and told the woman there that his bags hadn't shown up on the carousel.  She smiled and told him not to worry because they were trained professionals and he was in good hands. 'Now', she asked Will, 'has your plane arrived yet?'

The scientific theory I like best is that the rings of Saturn are composed entirely of lost airline luggage.  Mark Russell

Ten Unusual Baggage Left Behind On London's Public Transport System Travelon travel luggage will, no joke, protect your belongings from pickpockets and thieves.

However, the toothless man who came in one day asking for his dentures was less fortunate.  He brought back what he had identified as his own set a few hours later, complaining of "rubbing". Will and Guy have learned that in the 1960s, the most popular thing found was umbrellas. Over 90,000 were lost in a typical year, we were informed. The number handed in today is nearer 7,000. However, there are shelves full of clothing, bags and books which dominate among the near 200,000 items recovered each year. See funny things left in books

This article about lost baggage really isn't funny.  It's more a cautionary tale.  Perhaps these statistics will act as a warning to split your clothes between two suitcases, especially if travelling with a family group. I expect you know of someone who has lost baggage on a flight.  The reason that we guess you know of a friend or relative who has lost a suitcase is that 1 in 100 people lose baggage.  Here is a report by Société Internationale de Télécommunications Aéronautiques', better known as SITA. 30 million pieces of airline luggage, approximately 1%, will go astray this year. SITA who monitor baggage in over 200 countries, said virtually all missing bags would be returned to their owners within an average of 31 hours.  However about 200,000  pieces (less than 1%) would never be found because they are lost or even stolen. Francesco Violante, managing director of SITA said the air transport industry spent about $2.5 billion a year tracking and returning luggage.  Part of this figure went on compensating passengers for lost items.  More bags are going missing due to airport congestion, short transition times, and switches from one airline to another. What are needed is better systems which can link bags to their owners. SITA concluded that the number one cause of late-arriving bags was mishandling when luggage is transferred between flights.  This accounted for 62% of hold-ups in 2009. Secondly was failure to load bags at the departure point, this made up 15% of delays. Attaching the incorrect destination tags at check-in accounted for just 3 percent.

Several years ago I was travelling between several European capital cities over a period of several days.  I had left my suitcase at a friend's place and was using a sports bag for the several days I'd be away. Men don't need large suitcases when travelling... every-one know that! I had to stay overnight in Germany and my suitcase did not arrive with me from France. I went to the Lost Luggage Office and reported the loss. My incident was handled by a gentleman in his early thirties. All I had with me was my passport, ticket and other travel documents, nothing else, not even a clean pair of socks.  At this point in the story, I can advise that I would be returning to Germany five days later. I was only staying overnight, I was on one of the last flights that night and had to leave the next morning on one of the earliest flights, I was a little concerned.  He seemed to sense my concern as he took the details and said something like, "Hopefully your bag will be on the next flight". I agreed with him, I hoped it would be on the next flight too, as there were several items in the bag that needed to be delivered at my next destination. He then said, "My English is not perfect and I am not sure how to say this next thing." As my German is extremely limited I asked him to just say what he wanted to say, I'd understand what he meant... surely. He then said, "Well, I have spare everything in my locker here and I will dress you, we look the same size." I believe he meant to say that he could lend me some clothing. To this day, I am wondering if he realised that he actually offered to physically dress me! Happily, my bag was on the next flight in and was delivered to my hotel that night. Footnote: This true story was kindly sent in by David, please send us your funny story of lost baggage.