Here is our collection of amusing sheep items.

The farmers are led by Gerry Lewis who is a renowned Welsh sheep herding
champion and the effects are produced by the light emitting diodes (LEDs)
strapped the sheep's back.  Naturally the team at the 'Viral Factory'
then use the film footage to create the end-product.

Matt Smith, the co-founder of ad agency The Viral Factory said: "The
people on camera are real farmers and they were really controlling the
sheepdogs. Rather than trying to fake it all we did it for real.

Will and Guy's Ten Fun Facts
About Sheep

Guy and Will built a skating rink in the middle of a pasture.
One day
a shepherd leading his flock decided to take a shortcut across the rink. The
sheep, however, were afraid of the ice and wouldn't cross it.

Desperate, the shepherd began tugging them to the other side.

'Look at that,' remarked Guy to Will. 'That bloke is trying to pull the
wool over our ice.'

Champion racehorses burst from their starting boxes and charge towards
the finishing line, eager to win.

However, Will and Guy have discovered that an English farmer claims one
of his racing rams established world record by covering a 220-yard course in
just 17 seconds. We heard that the course contained no ewe bends at all.

The Hoo Farm in Shropshire,
England, is famous for
sheep steeplechasing.
In fact, at one time, the hurdles for steeplechasing contained flocks of
sheep.

And here on Ewe-Tube: is a wonderful sheep video 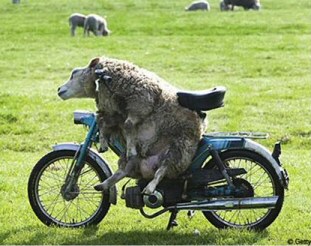 Will and Guy were so surprised to find this photograph of a sheep
riding on a moped that we had to research further to find out why this
hilarious picture was published in the first place.

This picture, which is very definitely of a sheep on a moped, and comes
to us from Stompetoren in the northern Netherlands.

In Holland, sheep farmer Nick Honig, has adopted the unusual method of
transporting his sheep. We have learned that the reason for moving his sheep
by moped is that his farm is to vast to transport them in a traditional way
using sheepdogs as this would take too long. So, he has chosen this method
which we find funny as well as clever.

Australian Farmers Have Used Motorbikes For Some Time

A Sign Spotted In Ireland. What Can It Mean?

A Hilarious and Funny Sheep Story from Will and Guy

Martha and the Vicar:

The Reverend Maurice Bowler, a children's minister, was talking in Sunday
School at St Jude's, Southsea, about the 23rd Psalm.

Maurice told the children about sheep, that they weren't clever and
needed lots of guidance, and that a shepherd's job was to stay close to the
sheep, protect them from wild animals and keep them from wandering off and
doing dumb things that would get them hurt or killed.

Maurice pointed to the little children in the room and said that they
were the sheep and needed lots of guidance. Then Maurice put his hands out
to the side, palms up in a dramatic gesture, and with raised eyebrows said
to the children, 'If you are the sheep then who is the shepherd?' He was
pretty obviously indicating himself.

A silence of a few seconds followed. Then Martha, a young pupil,
exclaimed, 'Jesus! Jesus is the shepherd!'

Maurice, obviously caught by surprise, said to the youngster, 'Well then,
who am I?'

Martha frowned, thinking hard, and then said with a shrug, 'Well, I guess
you must be a sheep dog.'

I Bet This Sheep is Heavy
When it Rains

If someone wants a sheep, then that means that he exists.  Antoine de
Saint-Exupery

Jerry the shepherd sent Fly, his trusty sheep-dog, out to gather and
count the flock to make sure none were missing.

Fly returns twenty minutes later and tells Jerry and says that there are
40 sheep.

Quick as a flash, Fly answers, 'Yep, but you told me to round
them up.'

Sheep takes a drink; notice that it appears to be standing on a box!

Why did Bo-Peep lose her sheep?
She had a crook
with her.

Mary Had a Little Lamb

"Mary Had a Little Lamb" is an English language nursery rhyme of
nineteenth-century American origin.

Mary had a little lamb its fleece was white as snow;
And everywhere
that Mary went, the lamb was sure to go.
It followed her to school one
day, which was against the rule;
It made the children laugh and play, to
see a lamb at school.
And so the teacher turned it out, but still it
lingered near,
And waited patiently about till Mary did appear.
"Why
does the lamb love Mary so?" the eager children cry;
"Why, Mary loves the
lamb, you know" the teacher did reply.
Silly Versions

1. Mary had a little lamb,
She ate it with mint sauce,
And
everywhere that Mary went
The lamb went too, of course.

2. Mary had a little lamb
Her father shot it dead.
Now it goes to
school with her,
Between two hunks of bread.

The Lamb by William Blake