Here is Will and Guy's collection of funny senior moments, humour,
and amusing stories.

A person is always startled when he hears himself seriously called "old
man" for the first time.

An Alternative, Funny and
Sympathetic Look at "Senior Moments Humor" 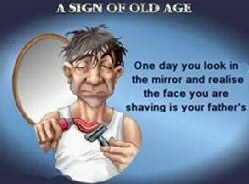 Will and Guy have learned that the expression senior moment was
apparently coined in America in the mid-nineties, but has become more
widely used in the UK during the past couple of years.

Originating with specific reference to seniors or senior
citizens - people aged sixty or over - it has now entered more
general use and can be applied in any situation where someone experiences
a momentary lapse of memory, regardless of their age.

The term highlights the idea that our brains simply weren't built to
cope with the information overload and stress generated by life in the
21st century.

An absent-minded activity, like putting your furniture polish in the
fridge or your prepared casserole in the cupboard, can also be referred to
as a senior moment.

Will and Guy's Best Clean Examples of Funny Senior Moments 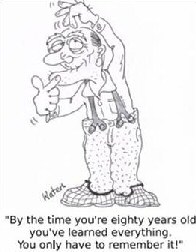 Archie, aged 88, has a problem with his house.  It has two storeys. It
has stairs. When he use the stairs, Archie stops midway to catch his
breath.  His main problem is that, when he is ready to start again, Archie
is unable to remember whether he was going upstairs or downstairs.

A letter to a national UK newspaper in the 1950's declared: 'My
grandfather, who is 87, has been converted to nudism. He sits all day long
in the greenhouse without a stitch on except for his hat. When I asked him
what he wants with a hat on if he's a nudist he hits out at me with his
walking stick and hollers, "Because I'm bald."

A Hand for the Bash

In his later life, a former Bishop of Lincoln, UK, found himself having
difficulty rising from a park bench where he had stopped to take the
weight off his feet. After struggling ineffectively, he was delighted when
a little girl offered a helping hand.

'That's very kind of you my dear,' he told her, 'But are you really
strong enough?'

'Oh yes, the child retorted, 'I've often helped my daddy when he was
much drunker than you.'

When I went to lunch today, I noticed an old man sitting on a park
bench sobbing his eyes out. I stopped and asked him what was wrong.

He told me, 'I have a 22 year old wife at home. She rubs my back every
morning and then gets up and makes me pancakes, sausage, fresh fruit and
freshly ground coffee.'

He added, 'She makes me homemade soup for lunch and my favourite
biscuits, cleans the house and then watches sports TV with me for the rest
of the afternoon.'

He said, 'For dinner she makes me a gourmet meal with wine and my
favourite dessert and then we cuddle until the small hours.'

You don't really know the meaning of embarrassment until your hip
replacement sets off a metal detector at the airport.

Quotations Which May Make You Smile, Laugh, Guffaw or Even Cry

Two elderly people are living in a retirement home near Fareham, he was
a widower and she a widow, had known each other for a number of years. One
evening there was a community supper in the big arena in the Clubhouse.
The two were at the same table, across from one another. As the meal went
on, he took a few admiring glances at her and finally gathered the courage
to ask her, 'Will you marry me?'

After about six seconds of 'careful consideration,' she answered 'Yes.
Yes, I will!'
The meal ended and, with a few more pleasant exchanges,
they went to their respective places. Next morning, he was troubled. 'Did
she say 'yes' or did she say 'no'?' He couldn't remember.

Try as he might, he just could not recall. Not even a faint memory.
With trepidation, he went to the telephone and called her. First, he
explained that he didn't remember as well as he used to.

Then he reviewed the lovely evening past. As he gained a little more
courage, he inquired, 'When I asked if you would marry me, did you say '
Yes' or did you say 'No'?'

Then she continued, 'And I am so glad that you called, because I
couldn't remember who had asked me.'

Senior in the Off-licence

There was a bit of confusion in the off-licence this morning.
When I was ready to pay for my whisky, the check-out assistant said to me,
'Strip down facing me.'

Making a mental note to complain to my Member of Parliament about
excessive security running amok, I did just as she had instructed.

When the hysterical shrieking and alarms finally subsided, I found out
that she was referring to my debit card.

I have been asked to shop elsewhere in the future. 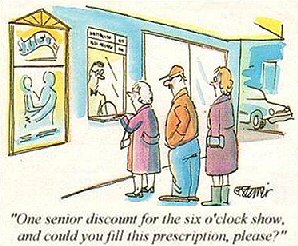 A former Sheriff of Doncaster, Yorkshire, UK had a particularly
irksome, long and tiring day carrying out his civic duties.

That evening he came to blows, and was later fined £20, [$30.50 USD],
for confronting a "canoodling couple" outside his bedroom window while he
was trying to sleep.

In the court the evidence presented put the ages of the couple
canoodling as 77 and 83.

Mr Henry Ellingham, the former world's oldest living man, says he
reached the ripe old age of 113 thanks to a lot of things other people
tell you to avoid. 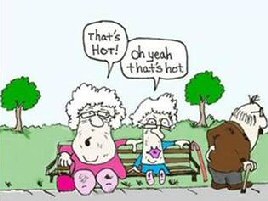 Two elderly guests, Martin and Chris, attended a party given by a
business associate to mark his daughter's engagement to a man she had been
living with for three years, were grumbling about the decline in moral
standards.

'All these people sleeping together before they're married,' Martin
muttered indignantly. 'I didn't sleep with my wife before we were married.
Did you?'

'I don't know,' answered Chris thoughtfully. 'What was her maiden
name?'

Yes, I am a Senior Citizen 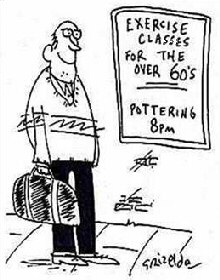 Yes, I'm a SENIOR CITIZEN and I think I am having the time of my
life.

'Now, Paula,' said Doctor Ross, 'you say you have shooting pains in your
neck, aching knees, frequent dizzy spells, and constant nausea. Just for the
record, how old are you?'

'Really?' commented the doctor quietly,  'I see you have slight
memory loss, too.'

If you apply some shaving cream on a tooth brush, then only you know it
tastes terrible.  I had this moment.

Now that we oldies can text, here are some helpful texting ideas.
Young people have their acronyms, now seniors have their own texting
codes: 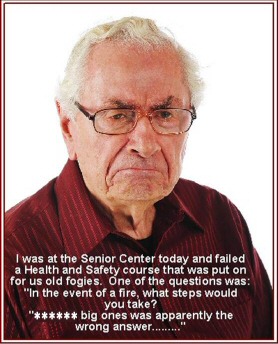 * BYOT - Bring Your Own Teeth

* FWIW - Forgot Where I Was

Another Funny Tale of a Senior 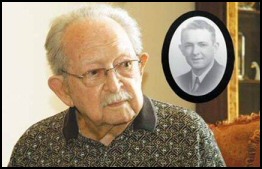 As we get older we sometimes begin to doubt our ability to "make a
difference" in the world. It is at these times that our hopes are boosted
by the remarkable achievements of other seniors who have found the courage
to take on challenges that would make many of us wither.

George is such a person. He told us, 'I've often been asked, 'What do
you do now that you're retired?'

'Well...I'm fortunate to have a
chemical engineering background and one of the things I enjoy most is
converting beer, wine and whisky into urine. It's rewarding, uplifting,
satisfying and fulfilling. I do it every day and I really enjoy it.'

George should be an inspiration to us all.