Is this a Christmas website for children?  Or can adults read it
too?  Here is Will and Guy's collection of funny letters to and
from Santa Claus.

Here, Will and Guy bring you some amusing correspondence to Santa Claus, Father
Christmas, Pere Noel. We hope that these letters, which we have discovered
on the internet will entertain
you.

A Real Santa Claus
Talks About His Role

Carl Anderson has been Santa Claus for 28 seasons, at last he has revealed what we already suspected.

Kids can be hilarious and heart-breaking and he's got some perfect tales
to illustrate it write Will and Guy.  Beyond the expected requests for the
latest Barbie and video game, kids have whispered into Santa Carl Anderson's
ear their desire for world peace and their pain at their parents' breakups.

'Kids see Santa as someone they can confide in,' Anderson, 57 informs us.
One little girl simply wanted a chair so she could write in a "little
diarrhoea" at her desk. 'Of course she meant diary, but the misspeaks are
pretty funny,' added Anderson.

Children's musings are often more serious, and reflect what's going on in
the news, or at home.

A boy pleaded for lots of toys for terrorists so they 'wouldn't hate us
so much,' says Anderson. Yet another little one, '...wanted money to help
mom pay the bills because she worries so much.'

It's not easy being Santa. I''s hard on the body and on the heart. 'I
feel for them a lot,' says Anderson. 'It's hard when kids ask me to get
their mommy and daddy to love each other again or when they want someone who
is sick to recover. I tell them I can't promise anything but I will make it
my wish for them - and I do,' he adds.  'Santa is a symbol of hope.
They know he'll always be there and care about them and want the best for
them.' 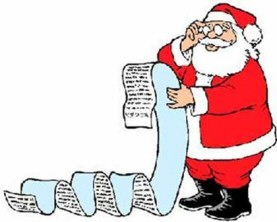 Dear Santa,
Please give me a doll this year. I would like her to eat,
walk, do my homework, and help me clean my room.
Thank you, Jenny

Dear Santa,
Thanks for the race car last year. Can I have another one,
only this time one that is faster than my best friend's race car?
Ricky

Dear Father Christmas,
I wish you could leave a puzzle under the tree for me. And
a toy for my sister. Then she won't want to play with mine and I can have it
to myself.
Merry Christmas, Cassie

Dear Santa,
You can send me one of everything from the boys' section
of the Sears catalogue. But nothing from the girls' section. I can't wait
for Christmas to come.
Kent

Dear Pere Noel,
Could you come early this year? I've been really super
good, but I don't know if I can last much longer. Please hurry.
Love,
Jordan

I lost my list of toys, so please just send me the stuff
that you forgot from last year.
Todd

Dear Father Christmas,
What should I leave for your reindeer to eat? Do they like
cookies, too? My mom won't let me bring hay into the living room.
Your
friend, Sandy

Dear Santa,
I need a new skateboard for Christmas. The one I got now
crashes too much. Band-aids would be OK too.
David

Dear Santa,
Would you rather I leave you cookies and milk or pizza?
Dad says you'd probably like the pizza. Write back right away to let me
know.
Love, Lisa

Dear Kris Kringle,
Please give me a tank, a jet fighter, 20 green soldiers,
and a bazooka gun. I'm planning a surprise attack on my brother. So don't
tell anyone.
Thanks, Danny

Dear Santa,
How will you get into our house this year? We don't have a
chimney and my father just installed a very expensive security system.
Julie 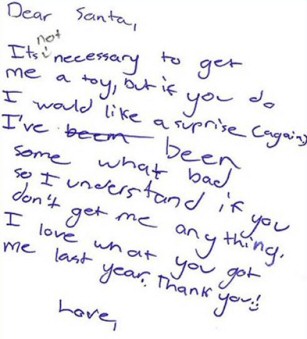 Dear Santa,
Mommy says that you only bring presents for the good
little boys. That isn't fair.
Brian

Dear Santa,
How old are you? How did you meet Mrs Claus? Is your first
name really Santa? Can I be an elf next year? Who is your favourite kid? How
do you fit all those toys in your sleigh? I have more questions for later.
Your pal, Pauline

Dear Father Christmas,
My mother told me to write to you and say thanks for the
train set. My dad plays with it all the time.
Mike

And finally Will and Guy's favourite:

Dear Santa,
I would like just one of everything.
Thank you. Nancy 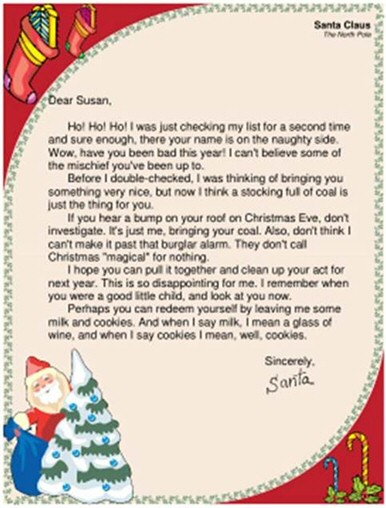 Dear Nancy, [see above]
I regret to inform you that I am unable to
leave a present for you this year due to the reason noted.

Address all appeals to the North Pole office, where they will be reviewed
before the next holiday cycle. Fees may apply.

Ratio of naughty to nice exceeds 1.5:1 (limit set by Kris Kringle
Standards Board, as revised 1862)

Neither cookies nor milk were left, and/or were spoiled, stale, or
otherwise substandard.
You're Jewish, Nancy.

No chimney.
At time of arrival on rooftop, Nancy was found to be
awake. Per long-time St. Nick protocol, all parties must be in full slumber
before Santa can deliver packages as scheduled.

Extensive elf research revealed that you, Nancy, no longer believe in
Santa Claus, or that you professed to younger believers that Santa is "not
real."
Kindest regards,
Santa

In 1920, J.R.R. Tolkien, of 'Lord of the Rings' fame, wrote and
illustrated a letter from Santa Claus for his three-year old son. This,
apparently, Will and Guy have learned, became a regular tradition for his
children for the next twenty-three years.

'I am dreadfully busy this year - it makes my hand more shaky than ever
when I think of it - and not very rich. In fact, awful things have been
happening, and some of the presents have got spoilt and I haven't got the
North Polar Bear to help me and I have had to move house just before
Christmas, so you can imagine what a state everything is in, and you will
see why I have a new address, and why I can only write one letter between
you both.

It all happened like this: one very windy day last November my
hood blew off and went and stuck on the top of the North Pole. I told him
not to, but the N.P.Bear climbed up to the thin top to get it down - and he
did. The pole broke in the middle and fell on the roof of my house, and the
N.P.Bear fell through the hole it made into the dining room with my hood
over his nose, and all the snow fell off the roof into the house and melted
and put out all the fires and ran down into the cellars where I was
collecting this year's presents, and the N.P.Bear's leg got broken.'

Hannah Howard's Christmas letter was hidden and lost in a chimney for
years.

The ghost of Christmas 100 years past arrived early for a County Down,
Northern Ireland man when he discovered the "Santa letter" his late mother
wrote when she was a girl. 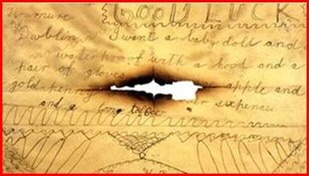 The scorched letter, shown here, dated Christmas Eve 1911, had been up a
chimney in a Dublin house for decades. Victor Bartlem's mother, Hannah
Howard, had written her Christmas wish list when she was just 10 years old.

It was first discovered in 1992 when the current house owner John Byrne
installed central heating. He came upon Hannah's letter in the chimney and
decided to keep it as a memento of times past. He made it public last year
[2011] in the Irish Times and it was there that Victor - living more than
100 miles away in Bangor, County Down, read about it.

Mr Bartlem informed Will and Guy that, 'I simply couldn't believe it. I
never knew about this letter. I never even knew it existed.' And he added,
'It is in the spirit of the time we are in at the moment which is
Christmas," he said.

We have been able to discover what was written on this 100 year old list.

We can't help feeling that the list is far less demanding than many
modern equivalents.
Hannah was born on Christmas Day 1900 and she died in
1978.