As you walk around your neighbourhood, or travel on the bus or train, keep
your eye out for funny rubbish notices in your area, meanwhile our collection of
amusing signs.

Please do not throw stones at this sign.  We cannot work out who is the more foolish, the
people who erected the warning sign, or those who threw the rocks and mud balls.

Please Do Not Leave
Rubbish Here 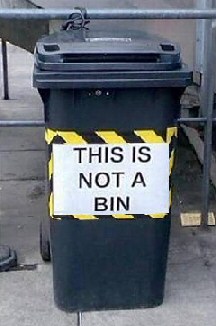 I recently asked a friend, 'Has your son decided what he wants to be when he grows up?'

'Yes, he wants to be a garbage collector', my friend replied.

I had to think about that one
for a moment. 'That's a rather strange ambition to have for a career,' I finally managed to reply.

'Well,' said the boy's
father, 'he thinks that garbage collectors only work on Tuesdays'.

A man has been fined £50 for putting rubbish in a bin. Andy Tierney of Hinckley, Leicestershire was issued the fixed penalty notice for dumping two junk mail letters. Hinckley and Bosworth Council accused
him of committing 'an offence under Section 87 of the Environmental Protection Act 1990. Domestic refuse from your property was dumped into a street litter bin the fixed penalty is £50.'

The council classes
letters as 'domestic litter', which should not be dropped in public street bins. According to BBC Radio news and The Sun, Andy said, 'How on earth can they fine me for being tidy? It's
absolute madness. I could
have easily chucked those letters on the ground, but I put them in the bin. What has happened is a joke. The council is barmy. I never thought you could be fined for putting rubbish in a bin - that's
what
they're there for.'

Andy was walking from his house to his car when his postman handed him the junk mail. He opened both letters as he strolled - then dumped them in the bin on a lamppost. Council officials
traced him from the addresses on the envelopes and issued the penalty. The letter threatens Andy with further action and a conviction if he does not pay within 14 days. Andy insisted, 'There's
absolutely no way
I'm paying up. You get fined for chucking rubbish on the ground. You get fined for chucking rubbish in the bin. So what exactly are you supposed to do?'

A spokesman from the council said, 'A fixed penalty
notice is served to people who we believe have committed an offence. Our litter bins are there to keep streets tidy, as they enable the public to deposit small amounts of litter. They are not provided for
household waste.'

NOTICE IN A DRY CLEANER'S WINDOW:
Anyone leaving their garments here
for more than 30 days will be disposed of.

It
Gets Worse - The Council Routinely Search Rubbish. (Reported in the Times) 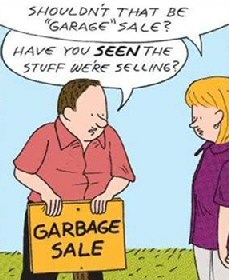 Today I can reveal the other side to the story, the council's
side. And the great thing is that it makes the council look even more fatuous than it did last
Thursday when Tierney contacted his local newspaper to complain about the fine.

The council now alleges that Tierney did not deposit just two letters in the litter bin, but a whole sack of 'domestic
rubbish'.  Tierney denies the imputation: 'They're just trying to save face. They've been made to look stupid, so they come up with this. Why didn't
they say that on Thursday?'

Quite; but more to the point,
how did they know that this black bag full of 'domestic rubbish'
had been deposited by Tierney - unless, that is, they pay someone to rifle through the garbage with the sole purpose of persecuting
rubbish-placement transgressors? Well, of course, on cross-examination it transpires that this is exactly what they spend your council tax on. Rubbish placement transgressor inspectors.

'If we find a black
bin bag in a litter bin, we will sift through the rubbish and attempt to identify who put it there, 'a council employee told me, with great patience, as if this were a perfectly reasonable thing to do.' A
refuse disposal man will identify a black bag and then report it to his supervisor and a decision will be made to examine the contents of the bag and, upon identifying the miscreant, issue a fixed penalty
notice.'  You couldn't
make this up and, luckily, I didn't
have to.

There are other eternally vigilant people employed by Hinckley and Bosworth borough council whose job it is to persecute the residents who
pay their wages. These are called neighbourhood wardens - 'the eyes and ears of the local community', according to the council spokeswoman.

It was one of these individuals who espied Tierney putting some
litter in a bin and quickly filed a report. So they have people paid to walk the streets and make sure you don't
put letters in a litter bin and other people employed to sift through your rubbish and fine you
if you do. Possibly people like you and I, possibly weird people whom you would not wish to sit next to at dinner.

The average council tax charge in Hinckley and Bosworth is £1,242.97 a year. Council tax
charges have risen by about 100% nationally over the past decade. This is a small price for such extraordinary vigilance, such devotion to the cause. Quite what the cause is remains a mystery.

Stolen 'wheelie' found in Bulgaria.
A council which has spent more than
£75,000 [$149,578.81USD] replacing stolen wheelie bins in the past year said one
had turned up in Bulgaria. Peterborough Council says more than 2,000 bins -
worth £30 [$59.84USD] each - have disappeared. Officials in East Anglia say they
can prove they own the bin found in eastern Europe, reports Sky News.

A spokesman said, 'One 240-litre green recycling bin clearly stamped with the
city council's name was even spotted in a residential area near the Black Sea
resort of Sunny Beach in Bulgaria. This is the most outrageous example of theft
of a wheeled bin we have come across.'

'Get Out of That', Say Binmen

Garbage disposal operators show their sense of humour in this short, but
funny, sequence of photographs:

Waste disposal, rubbish removal, garbage collectors, domestic refuse operator
- whatever you may call them, do a fine job. They take away the things we no
longer want and dispose of them.

Some people in the UK give their 'dustbin man' a monetary tip at Christmas
because they do such a good job of work during the year. Therefore, Will and Guy
were very surprised to see that some thoughtless person had parked their car
blocking the garbage collectors way to their bins.

However, we are able to report to our readers that the 'binmen' had it all in
hand and they reeked their revenge on the unsuspecting the car owner.

Perhaps the above drivers upset the binmen just once too often!  By the
way, can you identify those cars in that skip?

What Did
These Cars Do to Upset the Refuse Cart Driver?

A rubbish bin lorry tipped over as it tried to take a corner, crushing
two parked cars in Hampshire, England

Mr Cui, a Chinese man, put his savings in a rubbish bin to hide them from burglars - then forgot and threw out
the bin.

In the rubbish bin was the equivalent of £3,200 [$6,000USD]. 'We looked around our home and finally decided to hide the money in the garbage bin, where we believed it was safest from burglary,' said Cui who lives in Qingdao city. But Cui and his
wife forgot about the money when they returned, reports Bandao City Papers. 'I threw away the garbage the day after I came home, since the bin was full,' he said.

Two days passed before Cui remembered
where he had hidden the money, and when he rushed to check the garbage room, it had already been taken away. 'Our last hope was the city garbage treatment centre, but the landfill was so vast that we knew our
money was lost forever,' he said.

Unusual, Funny and Strange Enquiries Made to Local Councils in England

The calls make a change from enquiries about council tax and rubbish bin
collection say Will and Guy.

My Old Man's a Dustman Sung by Lonnie Donegan

I say, I say Duncan
I 'er...I found a police dog in my dustbin
(How
do you know he's a police dog)
He had a policeman with him

Now one day while in a hurry
He missed a lady's bin
He hadn't gone
but a few yards
When she chased after him
'What game do you think
you're playing'
She cried right from the heart
'You've missed me...am
I too late'
'No... jump up on the cart'

Now here's a little story
To tell it is a must
About an unsung hero
That moves away your dust
Some people make a fortune
Other's earn a
mint
My old man don't earn much
In fact....he's flippin'.....skint

Oh, my old man's a dustman
He wears a dustman's hat
He wears cor
blimey trousers
And he lives in a council flat
He looks a proper
narner
In his great big hob nailed boots
He's got such a job to pull
em up
That he calls them daisy roots

I say, I say Duncan
I 'er...I found a police dog in my dustbin
(How
do you know he's a police dog)
He had a policeman with him

Though my old man's a dustman
He's got a heart of gold
He got
married recently
Though he's 86 years old
We said 'Ear! Hang on Dad
you're getting past your prime'
He said 'Well when you get to my age'
'It helps to pass the time'

I say, I say, I say
My dustbins full of lillies
(Well throw 'em
away then)
I can't Lilly's wearing them

Now one day while in a hurry
He missed a lady's bin
He hadn't gone
but a few yards
When she chased after him
'What game do you think
you're playing'
She cried right from the heart
'You've missed me...am
I too late'
'No... jump up on the cart'

I say, I say, I say (What you again)
My dustbin's absolutely full with
toadstools
(How do you know it's full)
'Cos there's not much room
inside

He found a tiger's head one day
Nailed to a piece of wood
The tiger
looked quite miserable
But I suppose it should
Just then from out a
window
A voice began to wail
He said (Oi! Where's me tiger head)
Four foot from it's tail

Oh, my old man's a dustman
He wears a dustman's hat
He wears cor
blimey trousers
And he lives in a council flat
Next time you see a
dustman
Looking all pale and sad
Don't kick him in the dustbin
It
might be my old dad