We thought long and hard before creating this bumper page of funny
religious stories.  What tipped the balance
was when a practicing clergyman sent in stories that he had given his blessing.

The Atheist and the Bear

An atheist was taking a walk through the woods. 'What majestic trees! What powerful rivers! What beautiful animals!',
he said to himself.

As he continued walking alongside the river he heard a
rustling in the bushes. Turning to look, he saw a 7 foot grizzly charging towards him.

He ran as fast as he could up the path. Looking over his shoulder he saw that the bear was closing in on him. His
heart was pumping frantically and he tried to run even faster.

He tripped and fell on the ground. He rolled over to pick himself up but saw the bear raising his paw to take a swipe at him.

At that instant the atheist cried out: 'Oh my God!...'

Time stopped.
The bear froze.
The forest was silent.

It was then that a bright light shone upon the man and a voice came out of the sky
saying:

'You deny my existence for all of these years, teach others I don't
exist and even credit creation to a cosmic accident.  Do you expect me to help you out of this predicament? Am I to count you as
a believer?'

The atheist looked directly into the light.

'It would be hypocritical of me to suddenly ask you to treat me as a Christian now, but perhaps, could you make the BEAR a Christian?'

'Very
well, 'said the voice. The light went out, and the sounds of the forest resumed.

And then the bear lowered his paw, bowed his head and spoke: 'Lord, bless this food which I am about to receive and for
which I am truly thankful, Amen.'

Saved by the Bell?

In 18th England they started running out of places to bury people.  Consequently, people would dig up coffins and take the bones to a 'bone-house'
and reuse the grave.  When reopening these coffins, 1 out of 25 coffins were found to have scratch marks on the inside and they realized they had been burying people alive. So they clergy
decreed that they should tie a string on the wrist of the corpse, lead it through the coffin and up through the ground and tie it to a bell. Someone would have to sit out in the graveyard all night (the 'graveyard shift') to listen for the bell.

Thus, someone could be 'saved by the bell'.
Also they could be considered a 'dead ringer.' 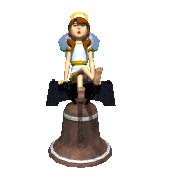 After Quasimodo's death, Bishop Thomas of the cathedral of Notre Dame
sent word through the streets of Paris that a new bell ringer was needed.
The bishop decided that he would conduct the interviews personally and went
up into the belfry to begin the screening process.

After observing while several applicants demonstrated their skills, he
decided to call it a day.

Just then a lone, armless man approached him and announced that he was
there to apply for the bell ringer's job.

Bishop Thomas was incredulous. 'You have no arms.'

''No matter,' said the man, 'observe!' He then began striking the bells
with his face, producing a beautiful melody on the carillon. The bishop
listened in astonishment, convinced that he had finally found a suitable
replacement for Quasimodo. Suddenly, while rushing forward to strike a bell,
the armless man tripped and plunged headlong out of the belfry window to his
death in the street below.

The stunned bishop immediately rushed down the stairways. When he reached
the street, a crowd had gathered around the fallen figure, drawn by the
beautiful music they had heard only moments before. As they silently parted
to let the bishop through, one of them asked, 'Bishop, who was this man?'

'I don't know his name,' the bishop sadly replied, 'but his face rings a
bell.'

This is allegedly based on a true story.  Guy and Will leave the final decision to you: 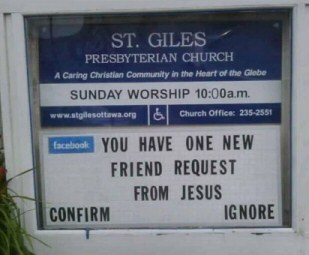 Mr Arnold, a businessman from Tulsa, Oklahoma, went on
a business trip to Amarillo, Texas. He immediately sent an e-mail back home to his wife, Paula.  Unfortunately, he forgot his wife's
exact e-mail address and the e-mail ended up going to a Mrs. P. Arnold
in Rapid City, South Dakota, the wife of a preacher who had just died. The preacher's
wife, Penny, took one look at the e-mail and promptly fainted.

When she was finally revived by her daughter, Penny hysterically
pointed to the message, which read, 'Arrived safely, but it sure is hot down here.'

Check out the Great American Book of
Church Signs.  It captures modern day faith on the road.  Each
sign reflects the enthusiasm of the local Church.  The book - and the
signs themselves - encourage us to live better lives.

Furthermore, Will and Guy
love the way each Church sign reminds us to laugh along life's journey.

There is the allegedly true story of Father George who began his sermon
early one Sunday morning by announcing to his congregation at St John's,
Newbury, England, 'I have good news and bad news. The good news is, we have
enough money to pay for our new building programme. The bad news is, it's
still out there in your pockets.' 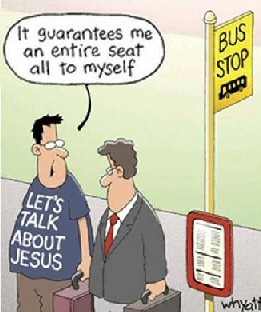 Father Michael, of St Mary's church began his sermon with this story: 'I
was on a plane last week, from Edinburgh to London, when we ran into some
very severe weather which resulted in turbulence.  As it got worse, the
passengers became more and more alarmed, and even the airline stewards began
to look concerned.

Finally, one of them noticed that I had 'Reverend' in front of my name on
the passenger list, so she approached me, and said, 'Sir, this is really
frightening. Do you suppose you could, I don't know.........do something
religious?'

'So I took up a collection,' retold Father Michael with a grin.

A new pastor in Topeka, Kansas, USA, spent the first four days making personal visits to each of his prospective congregation inviting them to come to his inaugural services.

The following Sunday the
church was all but empty. Accordingly, the pastor placed a notice in the local newspapers, stating that, because the church was dead, it was everyone's
duty to give it a decent Christian burial. The funeral
would be held the following Sunday afternoon.

Morbidly curious, a large crowd turned out for the 'funeral'.

In front of the pulpit they saw a closed coffin which was covered in flowers. After the
priest had delivered the eulogy, he opened the coffin and invited his congregation to come forward and pay their final respects to their dead church.

Filled with curiosity as to what would represent the
corpse of a 'dead church', all the people eagerly lined up to look in the coffin. Each 'mourner'
peeped into the coffin then quickly turned away with a guilty, sheepish look.

In the coffin, tilted at
the correct angle, was a large mirror.

A man is taking a walk in Central park in New York. Suddenly he
sees a little girl being attacked by a pit bull dog . He runs over and starts fighting with the dog. He succeeds in killing the dog and saving the girl's
life.

A policeman who was watching the scene
walks over and says, 'You are a hero, tomorrow you can read it in all the newspapers, 'Brave New Yorker saves the life of little girl'.

'Oh ,then it will
say in newspapers in the morning, "Brave American saves life of little girl",' the policeman answers.

'But I am not an American!'
says the man.

Father O'Malley and the Clever Beggars

Two beggars are sitting on a park bench in Ireland.  One is holding
a cross and the other a Star of David.

Father O'Malley, the priest, watches for a while and then approaches the
men. He says to the man with the Star of David, 'Don't you realize that this
is a Catholic country?  You'll never get any contributions holding a
Star of David.'

The man turns to the one with the cross and says, 'Moishe, can you
imagine, this goy is trying to tell us how to run our business?'

A
Funny, Thought-Provoking Story Not Found in The Bible

Menachim, a Jewish father was troubled by the way his son, Benjamin, had
turned out, and went to see Rabbi Goldberg about it.

'I brought Benjamin up in the faith, gave him a very expensive bar
mitzvah; it cost me a fortune to educate him, then he tells me last week he
has decided to be a Christian. Rabbi, where did I go wrong?' pleaded
Menachim.

'Funny, Menachim, that you should come to me,' commented Rabbi Goldberg.
'Like you I, too, brought my boy up in the faith, put him through
University; that cost me a fortune, then one day he, too, tells me he has
decided to become a Christian.'

'What did you do?' inquired Menachim

'I turned to God for the answer,' replied the Rabbi.

'And what did He say?' pressed Menachim.

Footnote:
Please write to Will and Guy if you have any
funny religious stories.