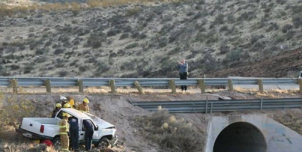 Hang on a minute, let us look at the BIG picture - scroll down. 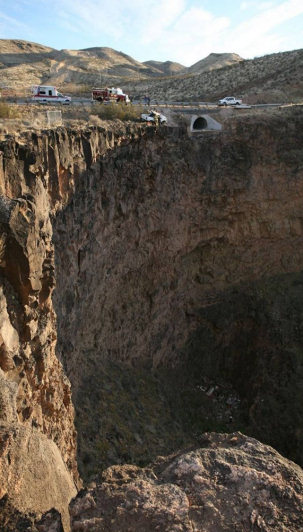 Phew, of all the lucky escapes, that takes some beating.  Unless you know of a luckier dice with death?

1) Sleep-walking A German teenager accidentally climbed out of a fourth-floor window and fell 10 metres to the ground where he continued sleeping, albeit with a broken arm and leg. The 17-year-old had just moved into a new flat in the town of Demmin, Germany, with his sister. He went "walking" on Sunday night and climbed out of the window after stepping on a cardboard box, police said. 2) Could Have Been Worse At the scene of a road accident in Thailand, a Silver Toyota Van had driven into the front of a restaurant causing minor injuries to two customers eating there. The driver of the van, Khun Giti, aged 40, remained at the scene and explained that he was travelling from Bangkok to Pattaya alone and fell asleep at the wheel. Amazingly, Will and Guy have established he crossed over the central reservation, across three lanes of traffic and slammed into the restaurant. Others who saw the van approaching managed to jump out of the way in time. Khun Giti was arrested and charged with reckless driving causing injury 3) Funny Fishy Escape

The owners of a trout farm were amazed a photographer caught their fish making an extraordinary escape on camera. Wildlife photographer Dennis Bright, 59, captured the aerobatic fish. He pictured the trout making giant leaps out of their pond into a metal feed pipe three feet above the water level. They then fought against the current for 30ft to the end of the eight inch wide pipe, which emerges underwater in a tributary of the River Itchen near Alresford, Hampshire, England. He remarked, 'It was an incredible sight. Swimming against the current is instinctive for trout as they head upstream to spawn but they are doing a remarkable job getting through that pipe.' 4) Happy Ending

In the aftermath of yet another devastating car bomb in Iraq, one bystander stumbled upon this amazing sight: a baby boy lying unhurt in the wreckage. Two people were killed and six wounded when the driver exploded his vehicle near an Iraqi army checkpoint in Mahmudiya, 20 miles south of Baghdad. The child, who has not been identified and thought to be about a year old, was dazed and covered in soot but otherwise unharmed. Footnote: Please send us your pictures of lucky escapes.