Share
Tweet
Pin
Share
Email
Here is a fantastic story of 'Lawn Chair Man', some say he is an urban myth, however Will and Guy believe this is a true story. 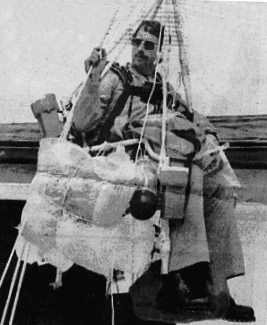 Back in 1982, Larry Walters achieved fame by piloting a lawn chair attached to helium balloons 16,000 feet above Long Beach.  Incidentally, his Lawn chair was christened 'Inspiration I' . What happened was Larry joined 42 weather grade balloons to an aluminium lawn chair.  He then filled the balloons by pumping in helium.  Two assistants then launched his chair by untying the Guy ropes. Larry prepared for his flight by packing a bottle of soda, a parachute and a portable CB radio to alert air traffic to his presence.   He took a camera but later admitted, that he was so paralysed by the view I didn't take any pictures.