Dreaming permits each and every one of us to be quietly and safely insane every night of our lives.  William Dement

January is named after the Roman god - Janus.  Doors and gateways are associated with Janus, hence January is a gateway to the year ahead.  It was only in 1752 that January was officially recognised as the start of the year in England.  Before then other dates such as March 25th were used. While January can be colder than December and the daylight hours are just as restricted,  January days bring hope and expectation, whereas December days bring only dispair. Will and Guy have selected pictures that remind us of the New Year and the weeks that follow.

Examples of Our January Pictures

Our aim is to capture the essence of each month with our pictures; in a word January means 'Snow'. 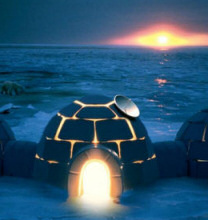 Arctic wonderland at the North Pole.  Can you spot the polar bear in the above wintry picture?

At the winter solstice, the sun is so low in the Orkney islands that it's rays light up the back wall of the cairn.  This only happens once a year on the shortest day - weather permitting. It's fascinating to think how our ancestors not only calculated what would happen, but had the time and patience to construct the aperture.

A Welsh tradition with a difference.  In a nutshell the Mari Lwyd tradition is wassail singing par excellence, with mummer animal head costumes, coupled with trick-or-treat menace.

Cat and Dog Fight Over Supper - Who Wins? 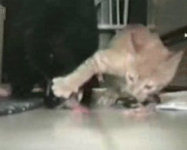 See what you think

See other interesting events that happened in January back down the years.