Examples of Will and Guy's Christmas Humor

A plastic reindeer in a South African shopping mall's
display lost the shiny golden Christmas tree baubles hanging between its hind legs after complaints from shoppers.

When you consider Christmas, there are four stages in your life:-

19 people have died in the last 3 years believing that Christmas decorations were chocolate.

31 people have died since 1996 by watering their Christmas tree while the fairy lights were plugged in. 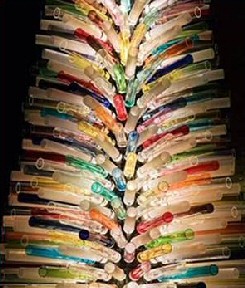 Santa Claus, the Tooth Fairy and an Honest Lawyer

Santa Claus, the tooth fairy, an honest lawyer and an old drunk are walking down the street together when they simultaneously spot a hundred dollar bill. Who gets it? The old drunk, of
course, the other three are mythological creatures.

Disappointment
f his
s Your Neigbourhood 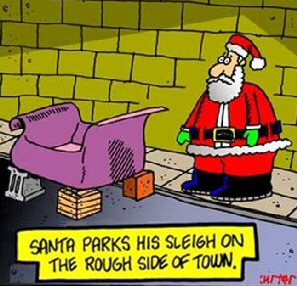 The boy who was playing the Inn Keeper was fed up of his insignificant role, so when Joseph knocked and asked if there was any room in the inn.  Instead of saying '
No'
as he was
supposed to, the young prima donna said, 'Come in Joseph and Mary, there is plenty of room in my inn.'

P.S. Please write to Will and Guy if you have any funny Christmas pictures.