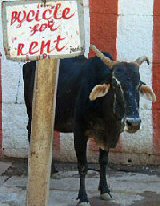 Have All Boys Done This? 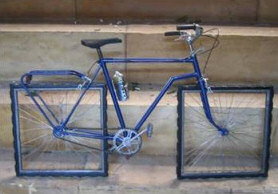 Here is a picture of a bike taken one afternoon.
When I returned half an hour later the bike was gone.  I will always wonder if the bike was stolen
by lifting the yellow wire over the pole, or reclaimed by its rightful owner.

Portsmouth Man Steals
Back His Own Bike

A Portsmouth man took the law into his own hands after his Specialize
bicycle was stolen. Craig Gifford said his was stolen last week after
loaning it to a friend.

Gifford told us that he spotted the stolen bike, which sported a
distinctive sticker, advertised for sale shortly afterward the News.

Gifford said he called police, but he said they were unable to respond
right away. The bike, which had been originally purchased for £950 in 2010,
was offered for sale at £150, and Gifford said he didn't want someone else
to buy it. He arranged to buy the bicycle and met the seller in North End
for a test ride, and Gifford said he simply rode off without paying.

Apparently the seller called him several times and left messages
threatening to call police but Craig Gifford said he posted his own advert
in The News warning others about the thief, and cautioned that high-end
bicycles offered for low prices could be stolen. 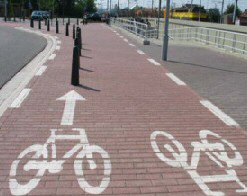 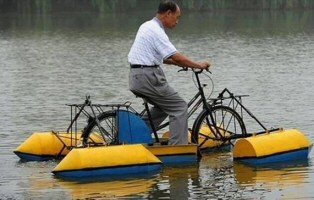 Firstly, Mr Evans, from Boulder, Colorado, USA, was knocked down by a car
in a hit-and-run incident and was taken to hospital for his injuries, but
was released later that night only slightly hurt.  Then, as he was
making his way back into town with his bicycle he was hit by a railway train
while crossing a bridge. Luckily he was found alive, in a creek, and taken
to hospital for a second time; once more his injuries were found not to be
life-threatening.

Wheels of
Life - Where Are You? 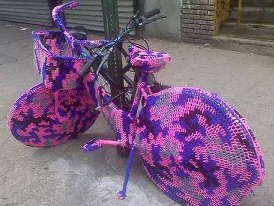 Footnote:
Please write to Will and Guy if you have any funny bike pictures.