Skip to content
Here we literally take a leaf out of the Suisse army pen knife.  Instead of a blade we have the hair-dryer, instead of corkscrew we have a lipstick. 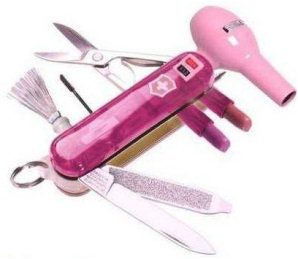 Far from picking stones out of boy-scout's hooves, this knife will help groom any girl into a film star. 1) Miniature hair-dryer to coiffure her hair. 2) Selection of lipsticks for that kiss-me-quick look. 3) Eyebrow pencil for that sultry look.

Extra blades with small tubes of 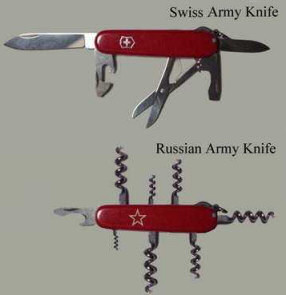 We also have an accompanying accessory, the make-up mouse.  See this handy gadget contains a mirror, make-up brush and a mini-bottle of perfume.

The Flip-side of Gadgets

According to a survey, two-thirds of people think gadgets are becoming too complicated. They're packed with features they don't understand, and subsequently never use. One newspaper illustrated the story with a photograph of 'a typical TV remote' featuring '43 baffling buttons', annotated with captions telling you what each of these buttons did, just to make it look even more complex and bewildering: 'cursor up', 'cursor down', 'a/v input connector 1', 'device mode', and so on. Thing is, there weren't enough buttons for my liking. I love a complicated TV remote. They should have more stuff on them: dials and joysticks and flashing lights. I dream of a remote with its own mouse. And I don't want a manual. I like to work out what each nubbin does through trial and error, poking it and staring at the screen. Best of all is the 'menu' button, which grants you access to a whole new array of on screen options, replete with little icons and sliding scales. Sit me in front of a brand-new telly and it's the first thing I'll reach for, because new tellies often come with surprising and exotic new features provided by the gods of technology. Coo! I can design my own font for the subtitles! Wow! I can flip the picture sideways so I don't have to lift my head if I'm lying perpendicular on the sofa! And look! There's a slider for adjusting the level of regional accents! Now I can make the Geordie guy who narrates Big Brother sound like a Cornish fisherman. I'll happily spend hours fine-tuning everything to my liking. Woe betide anyone who hits the 'restore default settings' button. That's like smashing a piece of ornate pottery I've created. The other day, a Sky repairman turned up and breezily started playing with my settings, adjusting the contrast and colour balance as if he owned the place. I was outraged by the violation, as though he'd pulled my trousers down and nonchalantly examined my goolies. I tend to assume other people share my obsessive need to examine the settings until everything is just so, and get genuinely enraged when I go to someone's house and discover, say, that they're watching programmes in the wrong aspect ratio. People over 50 are the worst offenders: they'll blithely sit through a Dad's Army repeat that is unnaturally stretched across the screen so that the entire cast look as if they had difficult births that left them with flattened skulls. Faced with this, I get acute back-seat-driver anxiety, and end up hectoring them like an exasperated pilot trying to teach a four-year-old how to fly a helicopter. Recently, I was on a plane, sitting beside an 80-year-old woman who couldn't comprehend how the in-flight entertainment system worked. It had a touch-screen monitor and an additional set of controls in the armrest. Thing is, she didn't understand the difference between my armrest and hers. There I was, watching a movie in a bid to distract myself from the terror of being 30,000ft up in the sky, when she patted cluelessly at my controls and switched it off. I started it again. Then she hit my fast-forward button. At this point, I politely explained what was going on and attempted to help her operate her system. She nodded and went 'ooh' and 'ahh', but try as I might, she just didn't get it. Ten minutes later, she stopped my film again, and kept doing so intermittently throughout the flight, sometimes switching my overhead light on for good measure, just to annoy me. Her screen, meanwhile, displayed nothing but the synopsis for an episode of Everybody Hates Chris, which she'd selected by accident but never played. She just sat there, staring at the synopsis for about three hours. I think she thought that was the entertainment. Shamefully, I found myself starting to genuinely hate her - her doddering incompetence somehow rendered her less than human. Reverse the situation - put me in a 1940s household, say, and ask me to operate a mangle, and the chances are I'd earn her contempt with an equal display of ineptitude. But it isn't the 1940s. It's now. So snap out of it. Hit the right buttons or get left behind, you medieval dunce. Do you want the robots to take over? Because that's what'll happen if we don't all keep up. How dare you jeopardise the human race like that. How dare you.

And if people still refuse to learn, let's force them into it. Replace all supermarkets with complex remote-control vending machines that dispense food only if you can successfully navigate your way through a 25-tier menu system. And make it illegal to pass the food to anyone else. Before long, we'll starve the idiots out of existence; manufacturers will never have to simplify anything ever again, and we'll enjoy a golden age of buttons and options and adjustable sliders and a/v input connector 1. Now that's progress. This week Charlie bought a bit of speech-recognition software designed to prevent RSI by letting you talk instead of type, but gave up after he spent more time correcting its mistakes: 'It got every sixth word wrong, which meant you'd swear in exasperation, and it would think you had finished each sentence by saying, 'Offer fox ache', and type that in too.' Footnote: Please send us your Suisse Army Make-up Pen Knife items.