A duck's quack doesn't echo, and no one knows why.

A duck in Beijing, China wears a pair of shoes made by its owner to protect
its webbed feet on the street.

After the
Black Sheep, we have a picture of the Yellow Duck

Perhaps as a child you dropped sticks into a river?  In those idyllic childhood days it always seemed we had a friend who also dropped their
stick and thus we had stick races.  Later fathers and especially uncles, took over the game and instead of sticks they introduced posh ducks.  Most likely this desire for bigger and better ducks was fuelled by
competition between brothers who had now grown up and used their children to continue their rivalry.

Nowadays racing yellow ducks seems a global activity.  It seems to take place in all countries where there is a good river.  I have to say a yellow ducks race is a fun way to involve a community in
fund raising.  Meanwhile enjoy these funny bird pictures.

"I'm King of The Castle" 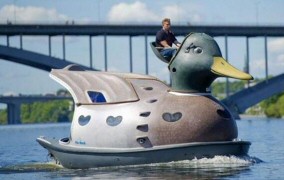 I have seen ducks follow farmers Wellington boots, but I have never before seen a picture of duckling following a dog.  I cannot help
thinking that this picture would be a good sign for a pub called the Dog and Duck.

Just in case you think it's the man the ducklings are following.  Wrong - it's dog the ducklings have imprinted on, see picture below.

Here is another example of duck imprinting 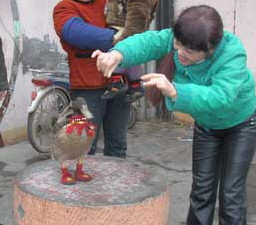 A duck, named Bengbeng, [apparently translates as 'Silly'] has become a
celebrity for its singing, dancing and counting abilities according to the Dahe
Daily.

Its owner, Du Xinai of Xingxiang city, China, takes the duck with him when he
goes to the local agricultural market to buy vegetables each day.

The duck can be seen here wearing a small red scarf and a pair of tiny shoes.
'If you ask him to sing, he quacks rhythmically while shaking his head and body.
He quite enjoys it. If you put up one finger, he quacks once, then twice with
two fingers, and so on.'

Du says Bengbeng is also a good citizen, and always waits for the traffic
lights.  Bengbeng has become quite a star.  Everywhere he goes, people
welcome him like a super star.'

Footnote:
Please send
us any funny duck pictures that you may have.