Share
Tweet
Pin
Share
Email
This is what in the old days would have been called a variety act.  I am not sure if you would call the star a magician, conjurer or a juggler, but he is good.  I do believe that the artiste's name is Wally Eastwood.  Further research reveals that the original act was devised by Dan Menendez, who performed on the Jay Leno show. 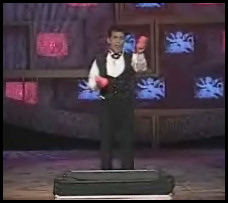 2) Playing the piano keys with the red balls - has to be so accurate. 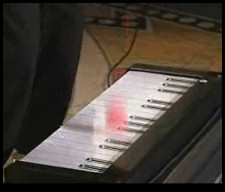 3) See how many balls he is playing / juggling 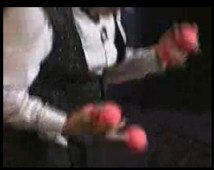 See our free video download and see what happened.  You will be amazed at the hand-eye co-ordination. N.B. With some browsers you need to click twice on the Play arrow

to start the video. N.B. Help for Mozilla browsers Free Video Download a Magician Playing the Piano with Tennis Balls

This video reminds Will of earlier times in his life:

In his youth, Will was particularly interested in making musical sounds using parts of his body. This may not be quite what you expect. Will often played the top of his head with his knuckles; [picked up many years later and performed on TV by A.N.Other] most usually the tune was Rossini's 'William Tell Overture'. At parties other people used to play his head with cardboard bottle tubes. He was also able to play his cheeks by slapping and his teeth with a pencil. Another party piece included the singing of the Guinness label on a bottle of stout. A brilliant example of unusual musical playing involved a friend and colleague, Nigel Frost, who, at a musical evening at Wakeford School, West Leigh prepared to give a lecture about the composer Rossini. He approached the lectern wearing a full dress suit with notes and a violin. Reading the rather boring notes he threatened continuously to play the violin to make his points clearer. Having driven the audience mad with anticipation, he then put the violin down, took out a Jews harp [Jew's harp, jaw harp, or mouth harp] and played the 'William Tell Overture' on it to rapturous applause.