One March evening, the boss of a big company needed to call one of his employees
about an urgent problem with one of the main computers, dialled the employee's
home phone number and was greeted with a child's
whisper.

'Is your daddy home?'
he asked.

The child whispered, 'No.'

Surprised, and wanting to talk with an adult, the boss asked, 'Is your Mommy there?'

Again the small voice whispered, 'No.'

Hoping there was somebody with whom he could leave a message, the boss asked, 'Is anybody else there?'

'Yes', whispered the child, 'a policeman.'

Wondering
what a cop would be doing at his employee's
home, the boss asked, 'May I speak with the policeman?'

'No, he's
busy', whispered the child.

'Talking to Daddy and Mommy and the
Fireman, 'came the whispered answer.

Growing concerned and even worried as he heard what sounded like a Helicopter through the earpiece on the phone the boss asked, 'What is that noise?'

'What is going on there?'
asked the boss, now truly alarmed.

In an awed whispering voice the child answered, 'The search team just landed the hello-copper.'

Alarmed,
concerned, and even more then just a little frustrated the boss asked, 'What are they searching for?'

Still whispering, the young voice replied along with a muffled giggle: 'ME.'

Last month, a world-wide telephone survey was conducted by the UN. The
only question asked was:

"Would you please give your honest opinion about possible solutions to
the food shortage in the rest of the world?"

The good psychic would pick up the phone before it rang.  Of course, it is
possible there was no-one on the other line.

Once she said 'God Bless you' I said, 'I didn't sneeze' She looked deep into
my eyes and said, 'You will, eventually.' And damn it if she wasn't right. Two
days later I sneezed.
Ellen DeGeneres

A man in Hamburg, Germany kept getting phoned, but when he picked up the
receiver there was no-one on the
other end of the phone.  To begin with he paid the phone company to block the number.
However, it was expensive just to stop one nuisance call, so he phoned the police.

The police soon tracked the calls to a barber's shop.  What happened was that
every time someone paid for the haircut by credit card, the credit card machine
erroneously dialled the wrong number.  What Will and Guy cannot understand
is why nobody at the barber's or the credit card company noticed the problem.
Fortunately, there was a happy outcome and the barber's credit card phone was
re-programmed. 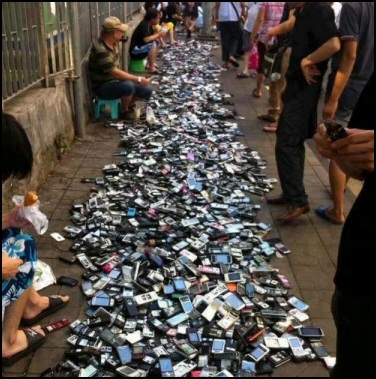 A woman in south-west France, who received a telephone bill of nearly 12
quadrillion euros, has had the real amount she owed waived - after the
company admitted its mistake.

The former teaching assistant said she 'almost had a heart attack. There
were so many zeroes I couldn't even work out how much it was.'

The phone company, Bouygues Telecom, initially told her there was nothing
they could do to amend the computer-generated statement and later offered to
set up instalments to pay off the bill.

Will and Guy understand that Bouygues Telecom has also apologised for the
gaffe, which it says was down to a printing error and a subsequent
misunderstanding between the client and staff at their call centre.