Guy's belief is that everyone has a phobia, it's just some people
hide theirs better than others.

Will's problem is Phobophobia  - The fear of
developing a phobia.

Will and Guy's List of Unusual and Strange Phobias

Extra one for luck: Phobophobia - The fear of developing a phobia, which,
we suppose, sums it all up.

'Doctor O'Hara,' Ranjit pleaded, 'I've got trouble. Every time I get into
bed, I think there's somebody under it. I get under the bed, I think there's
somebody on top of it. Top, under, top, under. You gotta help me, I'm going
crazy.'

'Just put yourself in my hands for two years,' said Dr O'Hara, the
psychiatrist, 'Come and see me three times a week, and I'll cure your
fears.'

'How much do you charge?'
'A hundred dollars per visit.'

'In that case, I'll sleep on it,' answered Ranjit.

Six months later the doctor met Ranjit in the street.

'Why didn't you ever come to see me again?' asked the psychiatrist.
'For a hundred buck's a visit?  A bartender cured me for ten dollars,'
smiled Ranjit 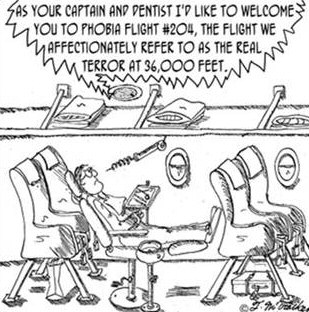 Aviophobics Fear of Flying
Sufferers Include the
Following Celebrities:

One of the most common fears, but nevertheless senseless is
triskaidekaphobic phobia
concerning the number 13.  There a specific fear of Friday the 13th as well, called paraskavedekatriaphobia.  Tetraphobia is the fear of the number 4, more
popular in China, Japan, and Korea.

Please send us your funny phobia jokes and stories.