Skip to content
There is something appealing about penguins, here is our collection featuring tales of this curious Antarctic bird. 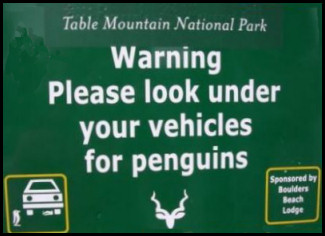 Neuwied - Germany Udo Vergens, a German train driver, thought that he saw a man lying face down on the track.  What could Udo do?  What would you do?  Well Udo slammed on the train's emergency breaks.  Fortunately, the train came screeching to a halt barely 2 metres from the body.   When Udo got close, he could see that it was not a man in a tuxedo, but a giant toy penguin. Passengers were less impressed as their journey was disrupted because of Udo's emergency stop. A Neuwied police spokesman said: 'We are at a loss to explain the presence of this very large penguin. 'We would think you would notice if you lost something like this.' Talking of notices, this is what the train driver missed: 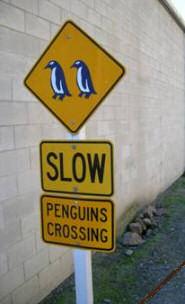 The above picture entices you to make up your own penguin story.  Why are the penguins crossing; where could they be going?  What about the fast penguins, where do they cross? 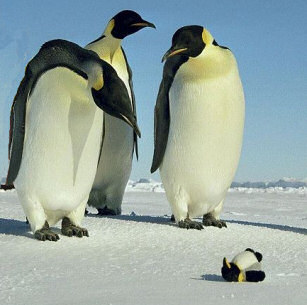 4) Elvis has a new pair of blue shoes

While they are not suede, they will keep the little blue penguin's feet dry and infection-free. Elvis and 16 other little blues who arrived at the International Antarctic Centre in September have been given specially designed shoes after several penguins developed sore feet in their new home. Brought from Napier's Marineland to take centre stage at the Antarctic Centre's Penguin Encounter display, the penguins are "second-chance" birds. Many have disabilities due to injuries. Antarctic Centre director Richard Benton said some of the penguins had developed sore feet, which had proved "tricky" to treat. Veterinarian Pauline Howard had suggested rubber shoes. Snugly tailored, with a springy sole, the shoes are available in kelp green or penguin blue - to complement any penguin tuxedo. Benton said some of the penguins had developed calluses from their new environment. Foot calluses were a common problem for penguins as they spent most of their time fishing at sea and were hardly ever on their feet. 'Captive penguins, however, can become a bit lazy and will spend a lot of time standing around waiting for their fish to come to them,' he said. The arrival of the penguins has boosted visitor numbers by 60 per cent, he added.

It is a fact that penguins swim in the water and generally enjoy themselves in wet conditions. However, Will and Guy have discovered that Pierre, the jackass penguin, who lives at the California Academy of Sciences, dislikes the wet stuff. Sadly, this is because Pierre is losing his feathers; he is going bald, especially around his bottom, and since penguins rely on their waterproof feathers for warmth, losing his feathers made Pierre unwilling to jump in the penguin tank with his 19 friends. The poor little fellow stood shivering on the side. Consequently, Oceanic Worldwide, a dive-supply company, dressed Pierre in a specially tailored wet suit that covers his body and has slits for his flippers. We are delighted to inform our readers that while Pierre has been wearing his wet suit , his feathers have grown again and he is now ready to swim in the nude again. It is a sobering fact that the number of jackass penguins [which are found only off the coast of southern Africa] have decreased from 1.2 million birds in 1930 to only 120,000 today. 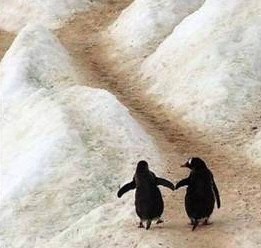 A Chinese aquarium staged a wedding for two penguins during their mating season. Wuhan East Lake Ocean World, China, planned the wedding for the two black-footed penguins. The groom, called Little Brat, and his bride, Little Beauty, were dressed up by aquarium staff for the ceremony. The groom wore a tie and the bride was dressed in a red blouse as they stepped into their icy wedding room to the music of the Wedding March. For their reception, the love birds enjoyed their favourite dish: spring fish.

7) Tale of the Penguin Who is Afraid of Water

Keepers at a British zoo said a resident penguin with a fear of water has become a hit with curious park visitors. Staff at Blackbrook Zoological Park in Leek, England, said 11-year-old Kentucky the Humbolt penguin developed a phobia of water because he was born a runt and had problems with losing feathers too quickly, making the water too cold for his comfort, Will and Guy have learned. 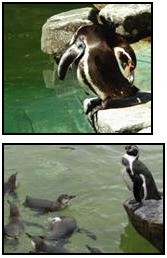 The poor little fellow finds that it's a bit too cold for him in the water, so he spends all his time on the rocks just walking around, says the zoo's assistant bird keeper. It's a bit of a pain having to go over especially to him to feed him because he won't go in the water, but he's a real character and everyone at the zoo loves him. We've got one of the biggest collections of birds in Europe here but Kentucky is a real a crowd pleaser. He has become quite famous because it's quite unusual for penguins not to like the water. Apparently the keepers douse Kentucky with water at least twice a day to keep his feathers healthy and clean.

8) Ralph the Bald Humboldt Penguin Gets a Wetsuit

A bald penguin has been given a specially-designed wetsuit to help protect him from the risk of sunburn. Penguins moult every year Will and Guy have been informed by their vet friend. This usually takes between four to six weeks to complete. Sad to report, Ralph, a nine year old Humboldt penguin, lost all of his feathers in one day, exposing his pale pink skin to the sun. So to protect him, Ralph's keepers made him a wetsuit out of the leg of an adult wetsuit donated by a member of the staff at Marwell Zoo in Hampshire, England. The wetsuit will protect Ralph's sensitive skin until his new feathers have grown through, which his keepers think will take another two to three weeks. The stretchy material lets Ralph move around normally, and after a few minutes adjusting he was happily back to swimming around in the penguin pool. 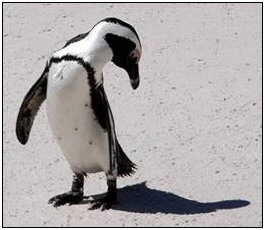 See another penguin story with pictures --->