Skip to content
Double yellow parking lines were first introduced to the curb-sides of the UK in 1958.  Will and Guy understand that in other countries a double yellow line is used in the centre (center!) of the road to demarcate the carriageways. 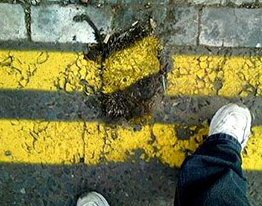 In Hartlepool, Cleveland, England road workers painted double yellow lines over a hedgehog because these idle toads could not be bothered to move the corpse before applying the yellow liner to this road's curb side. Florist Allison Hart said she was shocked to see the dead animal with lines on its back and sent a photograph of it to media outlets. "I couldn't believe it when I saw the hedgehog - it's disgraceful," said Ms Hart, who has been showing the photograph to customers in her store. "All they had to do is kick it to one side. It's shocking really," Ms Hart said. As usual, a council jobsworth dug themselves in deeper by, saying the incident was "the only one reported during the massive project". Wouldn't it have been better to say, 'fair enough' we made a mistake. 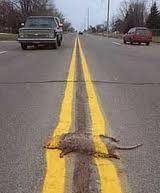 Can you help us identify the country and, or, the animal?  We see here that the yellow line is down the middle of the road, could it be the USA or Australia?

Workmen painting white lines on a road left a gap for a dead badger because they said it was not their responsibility to move it.  The animal had been killed about a week before on the A338 near Downton, on the Hampshire-Wiltshire border, England. Hampshire County Council said the workers did what they thought 'was best' because it is the district council's job to remove carcasses. Subsequently the dead badger has been removed and the lines will be painted. 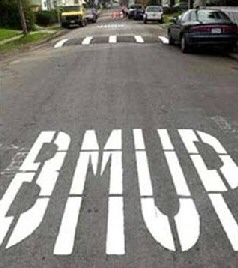 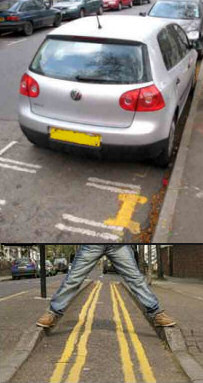 The 18-inch single yellow line in Highbury Crescent in Highbury, London is just long enough to fit one wheel, reports the BBC. Islington Council said no ticket has ever been issued on the line, which was put there 'to help drivers'. Councillor Lucy Watt, of Islington Council, said the stretch of kerb was shared by residents' bays and pay and display bays. She added, 'In Islington we take a common sense approach to parking enforcement. This means making sure signs and lines clearly identify the different parking bays we provide for residents and visitors.' Will and Guy say: In the old days, a 'common sense approach' would have meant extending the adjacent parking bays by 9 inches each.

Another Candidate for the World's Silliest Double Yellow Lines

As if the yellow lines in Highbury Crescent, London were not stupid enough, we have found another example of money wastage by a local council because of a 'jobsworth' attitude. This time the lines are in Islington, London, where a road, which is just over a metre wide, has been painted on both sides of the street to emphasise that parking there is prohibited. Once again Will and Guy say, 'You couldn't make it up.' See more about jobsworths in England.

Mike Fox of Salisbury Road, West Ealing, London, kindly agreed that contractors could move his car so that they could paint yellow lines. A waiting traffic warden pounced and issued a parking ticket in the spot where the contractors had parked Mike's car. One morning Michael Dickinson of Hendon, parked his car perfectly legally. The road had never had any parking restrictions. However, when he returned in the afternoon, he could see that a yellow line had been painted up to his car, and furthermore a warden had slapped a parking ticket on his windscreen. Zero sense of natural justice. 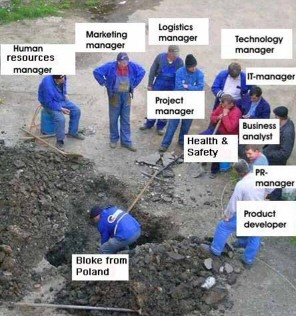 How many men does it take to dig a hole?  Is it ten, or maybe eleven! Picture kindly sent in by Alistair. 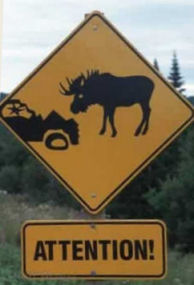