3) What's the matter with the Panda cub?

Incidentally, cubs are born blind, but they are
able to cry and call out to the mother for milk.

Check out the Panda video and see what happened
next.

Pandas having liquid refreshment at the picnic

Three of eight pandas which have been chosen for an Olympic exhibition tour to
Beijing. They were selected in an online poll when about 10 million votes were
cast. 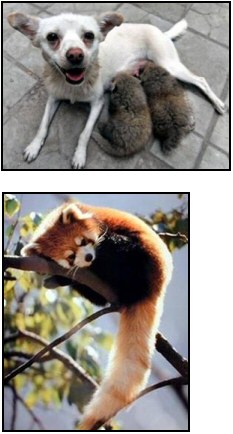 Two abandoned red panda cubs are thriving at a zoo in China - after being
adopted by a dog Will and Guy can reveal. The word "panda" actually
translated from the Chinese means "bamboo eater". The cubs were ignored by
their mother after it gave birth in front of a crowd at Taiyuan Zoo in
China's Shanxi province we have learned.

The zoo urgently needed a replacement mother if the cubs were to live and
they found a dog which had recently given birth on a neighbouring farm. The
dog is now raising the two cubs like its own offspring; sometimes even
refusing to feed her own pup. We have discovered from Zoo worker, Ha
Guojiang, that the stand-in mum is good-natured and has happily adopted the
cubs. At three weeks old, the baby cubs have not yet opened their eyes but
have doubled in length to 20cms [8ins].

Footnote:
Please send us your interesting facts about
Panda bears