Here is Will and Guy's collection of funny short stories about the joys of old
age.

A man is not old until his regrets take the place of dreams. Wise Proverb

Old Age is a Gift - I Have Decided

I am now, probably for the first time in my life, the person I have always wanted to
be. Oh, not my body! I sometime despair over my body - the wrinkles, the baggy eyes, and the sagging butt. And often I am taken aback by that old person that lives in my mirror, but I don't
agonize over those
things for long.

I would never trade my amazing friends, my wonderful life, my loving family for less gray hair or a flatter belly. As I've aged, I've become more kind to myself, and less critical of myself.
I've become my own friend. I don't
chide myself for eating that extra cookie, or for not making my bed, or for buying that silly cement gecko that I didn't
need, but looks so avant-garde on my patio. I am
entitled to overeat, to be messy, to be extravagant. I have seen too many dear friends leave this world too soon; before they understood the great freedom that comes with aging.

Whose business is it if I
choose to read or play on the computer until 4 am, and sleep until noon?  I will dance with myself to those wonderful tunes of the 60's, and if I, at the same time, wish to weep over a lost love.. I will

I will walk the beach in a swim suit that is stretched over a bulging body, and will dive into the waves with abandon if I choose to, despite the pitying glances from the bikini set. They, too, will get old!

I know I am sometimes forgetful. But there again, some of life is just as well forgotten, and I eventually remember the important things.

Sure, over the years my heart has been broken. How can your heart
not
break when you lose a loved one, or when a child suffers, or even when a
beloved pet gets hit by a car? But broken hearts are what give us strength
and understanding and compassion. A heart
never broken is pristine and
sterile and will never know the joy of being imperfect. 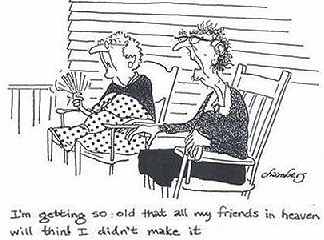 I am so blessed to have lived long enough to have my hair turn gray, and to
have my youthful laughs be forever
etched into deep grooves on my face. So
many have never laughed, and so many have died before their hair could turn
silver. I can say 'no', and mean it. I can say 'yes', and mean it

As you get older,
it is easier to be positive. You care less about what
other people think. I don't
question myself anymore. I've even earned the right to be wrong

So, to answer your question, I like being old. It has
set me free. I like the person I have become. I am not going to live forever, but while I am still here, I will not waste time lamenting what could have been, or worrying about what will be. And I shall eat
dessert every single day

Today, I wish you a day of ordinary miracles.

How to Age with Humour

Journalists were interviewing Molly Holderness, a 103-year-old woman, 'Tell
us, Mrs Holderness, what do you think is the best thing about being 103?' the
reporter asked.

Molly smiled and looked straight at the reporter and simply replied, 'No peer
pressure.'

'I feel like my body has gotten totally out of shape, so I got my doctor's
permission to join a fitness club and start exercising. I decided to take an
aerobics class for pensioners [seniors]. I bent, twisted, gyrated, jumped up and
down, and perspired for an hour. But, by the time I got my leotard on, the class
was over.' 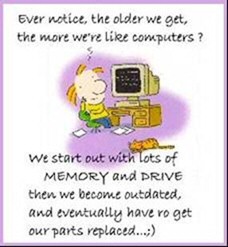 Ron, an eighty five year old
man, was sitting on the couch with his wife, Maisie, when she said to him,
'Why don't you come sit close to me like you used to.' So he did.

Ernie,
an old man says to his doctor, 'Doc, I've lost my memory.'
Doctor Sims,
'When did this begin, Ernie?'
Ernie replies, 'When did what begin?' 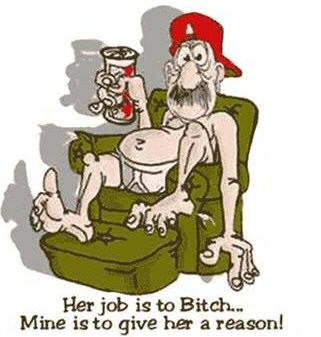 There were two elderly
people, George and Sheila, living in a North Carolina mobile home park in
the suburbs of Concord. He was a widower and she a widow and they had known
one another for a number of years.

One evening a supper was held in the communal refectory and the two found
themselves at the same table, seated across from one another. As the meal
progressed, George made several admiring glances at Sheila and he finally
gathered his courage to ask her, 'Sheila, will you marry me?'

After about five seconds of "careful consideration", Sheila answered.
'Yes. Yes, I will.'

The meal ended and, with a few more pleasant exchanges, then they went to
their respective caravans. Next morning, George was troubled: 'Did she say "yes" or did she say
"no"?' He couldn't remember. Try as he would, he just
could not recall. Not even a faint memory. So it was with some trepidation
that he went to the telephone and called Sheila. Firstly, he explained that
he didn't remember as well as he used to. Then he reviewed the lovely
evening past. As he gained a little more courage, George inquired gingerly,
'Sheila, when I asked if you would marry me, did you say "Yes" or did you
say "No"?'

George was delighted to hear her Sheila say, 'Why, I said, "Yes, yes I
will" and I meant it with all my heart.' Then she continued, 'I am so glad
that you called, because I couldn't remember for the life of me who had
asked.'

I've seen this with the letters out of order, but this is the first time
I've seen it with numbers. Good example of a Brain Study: If you can read
this you have a strong mind. And better than that: Alzheimer's is a long
long, way down the road before it ever gets anywhere near you.

To my 'selected' strange-minded friends: If you can read the following
paragraph, forward it on to your friends with 'yes' in the subject line.
This is weird, but interesting!

Another Funny Story About Old Age

This Kind of Stuff Has Got To Stop In Our Country

We Must Stop This Immediately!

Have you noticed that stairs are getting steeper?  Groceries are heavier.  And, everything is
farther away. Yesterday I walked to the corner and I was dumbfounded to discover how long our street has become!  This extension work was apparently done at night!! Very sneaky stuff.  And, you know, people are
less considerate now, especially the youngsters. They speak in whispers all the time! If you ask them to speak up they just keep repeating themselves, endlessly mouthing the same silent message until they're
red in the face! What do they think I am, a lip reader

I also think they are much younger than I was at the same age.

On the other hand, people my own age are so much older than I am. I ran into an old
friend the other day, and she has aged so much that she didn't even recognize me. 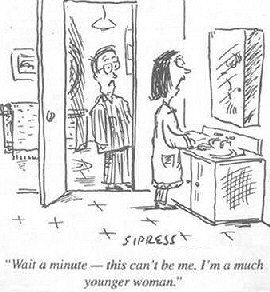 I got to thinking about the poor dear while I was combing my hair this morning, and in doing so, I glanced at my own
reflection........ Well, REALLY NOW - even mirrors are not made the way they used to be!

Another thing, everyone drives so fast these days! You're risking life and limb if you happen to pull onto the freeway
in front of them.  All I can say is, their brakes must wear out awfully fast, the way I see them screech and swerve in my rear view mirror.

Clothing manufacturers are less civilized these days. Why else
would they suddenly start labelling a size 32 pair of pants a 42, or medium shirt as 'extra large'? Do they think no one notices that these things no longer fit around the waist, hips, thighs, and neck?

The
people who make bathroom scales are pulling the same prank, but in reverse. Do they think I actually "believe" the number I see on that dial? Heck!  I would never let myself weigh that much! Just who do these
people think they're fooling? I'd like to call up someone in authority to report what's going on -- but the telephone company is in on the conspiracy too: they've printed the phone books in such small type that
no one could ever find a number in there!

All I can do is pass along this warning: We are under attack! Unless something drastic happens, pretty soon everyone will have to suffer these awful indignities.

PLEASE PASS THIS ON TO EVERYONE YOU KNOW AS SOON AS POSSIBLE SO WE CAN GET THIS CONSPIRACY STOPPED!

PS: I am sending this to you in a larger font size, because something has caused my computer's regular
fonts to be smaller than they once were. (They must be sneaking to my house and messing around with my computer. Probably CIA....!!!) Pretty scary stuff huh?

Not So Much a Short Story - More a Poem

Your kids are becoming you...and you don't like them
...but your
grandchildren are perfect.
Going out is good.
Coming home is better.
When people say you look "Great"...
they add "for your age".

When
you needed the discount you paid full price.
Now you get discounts on
everything ...
movies, hotels, flights, but you're too tired to use
them.
You forget names ... but it's OK
because other people forgot

they even knew you!

The 5 pounds you wanted to lose
is now 15
and you have a better chance
of losing your keys than the 15 pounds.
You realise you're never going
to be really good at anything ...
especially golf.
Your husband is counting on you
to remember things
you don't remember.

The things you used to care to do,
you no longer
care to do,
but you really do care that you
don't care to do them
anymore.
Your husband sleeps better on a lounge chair
with the TV
blaring than he does in bed.
It's called his "pre-sleep".

You used to say,
"I hope my kids GET married ..."
Now, "I hope
they STAY married!"
You miss the days when everything worked
with
just an "ON" and "OFF""switch..
When GOOGLE, ipod, email, modem ...
were unheard of, and a mouse was something
that made you climb on a
table.
You used to use more 4 letter words ...
"what?"..."when?"

Now that you can afford
expensive jewellery, it's not safe to wear it
anywhere.
Your husband has a night out with the guys
but he's home
by 9:00 pm ...next week it will be 8:30 pm
You read 100 pages into a
book before you realise you've read it.
Notice everything they sell in
stores is "sleeveless"
What used to be freckles are now liver spots.

Everybody whispers.
Now that your husband has retired ...
you'd give
anything if he'd find a job.
You have 3 sizes of clothes in your closet
....
2 of which you will never wear.
But old is good in some things:

old songs
old movies
And best of all OLD FRIENDS.

Love you, "OLD FRIEND".
Send this on to other "Old Friends" and
let them laugh in AGREEMENT!!!
Author unknown

Footnote remember:
Please send us your funny story about old age is a gift.