These funny signs make Will and Guy think: who put them there, are
the signs
real or fake.  Is the resulting image funny, offensive, or just plain stupid.
Amongst these 'No' signs allowed is something for everyone.

You Would Never
Guess What This Pipe Sign Says!

Do Not Climb Play On, And Around Pipe. 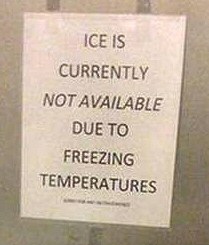 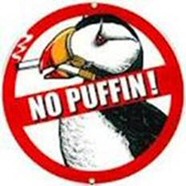 Sailors call the Atlantic puffin "clown of the sea".  This one is just
jesting.

Atlantic puffins often live for 20 years, but not if they smoke!  The oldest known puffin was 29 years old.

Atlantic puffins spend much of their lives at sea.
They are amphibious being able to fly through the air other birds, but
they can use those stubby wings as paddles and steer using their webbed
feet rather like a boat's rudder. 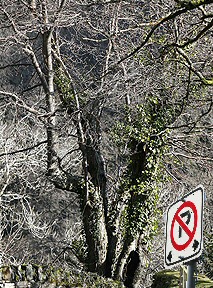 A newly discovered species of tree has been named 'No Parking'. What
happened was the National Museum of Wales set about finding new species, or
sub-species of trees. They discovered a new whitebeam and named it 'Sorbus
no parking'.

The team did not confine their search to Wales and they found this new
tree growing in a layby at Watersmeet in North Devon, UK.  As this was
a layby, a local official had once nailed a 'No Parking' sign to the trunk
of this particular tree.

When they listed the no parking whitebeam in Watsonia, the official
journal of the Botanical Society of the British Isles, they chickened out
and called it Sorbus admonitor (Admonish tell-off).

Two anniversaries coincided with this search for new species in March
2009, the bicentenary of Charles Darwin's birth and the 150th anniversary of
the publication of his seminal work 'Origin of the Species' in 1859.

Entrance Only - Do Not Enter

Here is another funny picture of a
notice that defies logic.  Therefore, we deduce that these
signs are genuine.

A classic stupid notice.  Will and Guy muse, how much to
sign-writers mistakes cost the economy.  But we don't dwell on this
philosophy for long, we are too keen so seek out more funny 'No signs'.

No Entry - Or Two Way Traffic?

This confusing combination of signs reminds Guy of driving in Spain, every
side-street  seemed 'No Entry', the signs conspired to lock me into the
city centre. 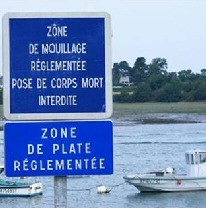 Anchorage regulated......Placing of dead bodies is not allowed.

An Australian male was barred from boarding a London-Melbourne flight
unless he removed a T-shirt depicting George Bush as the world's number one
terrorist.

Later the same day the same man was prevented from catching a connecting
flight within Australia unless he removed the T-shirt.

3) Teachers Not Up to Speed

Teachers "not allowed" to chase four-year-old school runaway: because of
health and safety risk!

It's being called a "safe handling policy," but the extraordinary health
and safety rule which has enabled an inquisitive four-year-old boy to
repeatedly wander out the school playground is enough to give any parent
nightmares. On four occasions since the start of term a youngster has walked
out of school grounds during break time to explore the outside world.

Each time he has apparently been spotted by the supervising member
of staff.  Instead of grabbing or running after him to bring him back,
the teacher has had to "track" the youngster on foot to ensure he comes to
no harm and they have to ring the police so officers can stop him. On one
occasion two young children were followed as they walked near a busy main
road and five police vehicles turned up to pick them up claimed one lady.
'It's crazy,' she said, 'an adult could easily catch up with him and safely
restrain him. But apparently it is school policy not to grab them.'

Acting head teacher responded, 'We have a positive safe handling policy
that allows us to use reasonable action. However it can be dangerous to
chase after a child because often it makes them run faster.'

Will and Guy wonder how fast a four year old is able to run.

'No Signs Allowed' - The King of the Pack

I wonder how this photo was composed.  Could it be a genuine picture?  Posed scene,
or do we suspect software enhanced?  Our conclusion is this a genuine funny picture:
'No Signs Allowed'.

Where did this 'No' sign come from?  A launderette?  A fishing
pond?

The truth:
Sign seen at a boat launching ramp in Hingham, Massachusetts,
USA.

This regularly used expression means: absolutely not; never. Apparently,
we learn that this slang expression originated in the USA sometime around
the 1960's.

One early example can be found in from The Washington Post, dated
December 1979: 'I've got nothing against robots. But no way, José, is this
guy going to win.'

Tired of constantly being broke, and stuck in an unhappy marriage, a young husband decided to solve both problems by taking out a large insurance policy on his wife (with himself as the beneficiary), and
arranging to have her killed.

A 'friend of a friend' put him in touch with a nefarious underworld figure, who went by the name of '
Artie.'
Artie explained to the husband that his going price for snuffing out
a spouse was 5,000 quid. The husband said he was willing to pay that amount, but that he wouldn't
have any cash on hand until he could collect his wife's
insurance money.

Artie insisted on being paid
SOMETHING up front. The man opened up his wallet, displaying the single pound coin that rested inside. Artie sighed, rolled his eyes, and reluctantly agreed to accept the quid as down payment for the dirty
deed.

A few days later, Artie followed the man's
wife to the local Tesco. There, he surprised her in the produce department, and proceeded to strangle her with his gloved hands. As the poor unsuspecting
woman drew her last breath, and slumped to the floor, the manager of the produce department stumbled unexpectedly onto the scene. Unwilling to leave any witnesses behind, Artie had no choice but to strangle the
produce manager as well. Unknown to Artie, the entire proceedings were captured by hidden cameras and observed by the store's
security guard, who immediately called the police. Artie was caught and arrested
before he could leave the store.

Under intense questioning at the police station, Artie revealed the sordid plan, including his financial arrangements with the hapless husband. And that is why, the next day
in the newspaper, the headline declared:

'ARTIE CHOKES TWO FOR A POUND AT TESCO.'

And to Finish - Nothing
Happened!

Footnote:
Please send us your funny "No Signs
Allowed".