What do you get if you cross a baboon with a skunk?
You always get a seat on the train.

A wheelbarrow load of orang-utans.  Will and Guy wonder if this
funny picture of the apes was taken in Asia.

Picture of a Funny Monkey, or To Be
Precise, a Baboon

A safari park is warning visitors to remove England flags from their cars
after a group of baboons began stealing them. 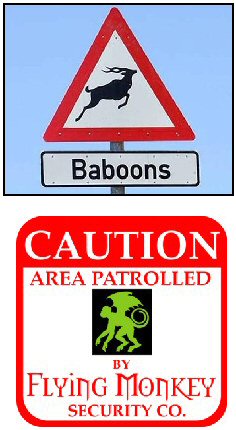 The animals have built up a huge collection of flags in the monkey enclosure at Knowsley safari park in Merseyside. Keepers at the park say the 120-strong troop
of baboons have been known to help themselves to windscreen wipers but have now turned their attentions to the World Cup flags.

Safari Park general manager David Ross told the Liverpool Echo, 'Many people
are wisely removing the flags before they set off on the safari drive. But if they forget, the baboons usually take them and they've now built up quite a collection.'

Guy thinks that this an evocative picture that once seen won't
go away.  My brain keeps asking questions such as, 'Do the Baboons take the flags because the support England, or because they support
one of the other nations?'
Also the poor chap in the picture looks sad - what does he know about England?

See no evil, hear no evil, speak no evil.

The names of the three wise monkeys are: Mizaru (See no evil), Mikazaru
(Hear no evil), and Mazaru (Speak no evil ).  Kindly sent by Chander
Menghani.

Monkey
Given the Bird

Funny Monkey Business and the
Dog

A Chinese zoo has given an orphan monkey its own guard dog to stop it
being bullied by bigger primates. Keepers at Jiaozuo City Zoo said the
monkey was always being bullied and they had intervened to save his life on
several occasions, Will and Guy have discovered. 'So we put a dog in the
monkey cage, hoping he can protect the orphan,' a zoo spokesman told us.

The zoo reports that the dog, Sai Hu, does his job very well. We can see
that is true from this picture.

'Whenever the baby monkey gets bullied, Sai Hu dashes up and drives the
others away; also, the baby monkey is also very smart and each time he
senses danger he runs to jump on the dog's back and holds on tight.

A pet puppy has become best friends with a caged monkey at a Chinese zoo.
The mutt is owned by a keeper at Nanhai Zoo, at Zhumadian city, China, who
takes her pet to work with her. She told the Dahe Daily newspaper that she
noticed a bond developing between the pair about a month ago.

'When the dog walked toward the cage, the monkey inside started to
shriek,' said the woman. 'And, as the six-month-old dog visited the monkey
more often, they developed a close friendship. The monkey would feed the dog
bananas and grooms its hair, while the dog would let the monkey ride on its
back.'

A spokesman for the zoo said it was happy for the dog to spend its days
in the monkey's cage as the unlikely double act was proving a hit with
visitors.

Who is Nonja you may well ask? She is in fact an extremely artistic and
interesting 33 year old orang-utan. Here she is studying one of her
masterpieces.

Nonja's handiwork has been viewed by tens of thousands of fans after
keepers at Vienna's Schoenbrunn zoo in Austria gave her a digital camera and
set up a Facebook page for her.

Snaps from the digital camera, which issues fruit treats whenever a
picture is taken, are uploaded instantly over a WiFi link. There are
slightly blurry images of Nonja's climbing rope, food and her companion's
shaggy red-brown fur have won lots of admiring comments from fans.

'It's an attempt to see the world through her eyes and see what she
thinks is important. She's very artistic,' one keeper informed Will and Guy.

Nonja turned to photography after a spell as a painter where her works
often reach up to £2,000 GBP [$3,400USD] at auction.

A collection of monkeys is usually called a troop (not troupe!).  However,
tribe is other collective noun for monkey, and I once heard a professor of
zoology refer to a 'mission of monkeys'.   At the other end of the
spectrum, I saw a stand-up comic use a gag about a 'circus of monkeys', but I
think that he made up that collective noun.

The largest monkey is the mandrill (see fiercesome  mug-shot opposite).
Monkeys have tails,
unlike apes like gorillas who have no such appendage.

It's true that monkeys spend most of their time in the trees, and the use
their tail like a fifth limb.
The higher a monkey climbs, the more you see of his behind. Joe Stillwell.

Friends: The Orang-utan and the Hound

At the "Tigers" Sanctuary in Myrtle Beach, South Carolina, USA., this
orang-utan, Suryia, was in the rescue centre and was not doing at all well.
This old Blue Tick hound, Roscoe, wandered in, truly emaciated, and the
orang-utan took to him from the moment the dog arrived. He stayed with the
hound night and day until he was well and during the process found a reason
to live. They are now inseparable friends.

A dog is not just a man's best friend, he's an orang-utan's friend too.

One of the most enduring legends about monkeys concerns the macaque, or Barbary
ape.  The legend has it that if these monkeys all die or are relocated,
then the British will be forced to leave Gibraltar.  (Despite their name
and lack of tail, they are true monkeys.)

In the second world war the population dwindled to less than 10, and seemed
unsustainable.  Then in 1941 prime minister Winston Churchill personally
ordered a secret mission.  Two special task forces were despatched in 1942,
one to Morocco and another to Algeria, they returned with about 20 Barbary apes.
Today there are over 200 Barbary apes on Gibraltar and it looks like the British
will be hanging on to this outpost on Spain's doorstep.