Dealing with Moles (Extra research by Will and Guy)

It is very difficult to persuade moles to take poisoned bait as they mainly eat
earthworms.  The most common method of control is with moles traps.  To be effective these heavy metal traps have to be viscous.  An unfortunate side-effect is that your pet dog could unearth the
trap and the sharp points and viscous springs could cause a nasty injury to their noses.

One effective, if time consuming method, is wait until you see activity in the mole burrow / tunnel and then bash them over the head with a spade.
Another tactic, depending on where you live, is send for the neighbourhood mole strangler, who in fact may try sonic devices to scare them away.

The natural enemy of the mole is the weasel, investigate
introducing a pair to your garden.  One enduring urban myth or old wives' tale is that moles cannot stand pickled onions in their burrows.

Types of Mole
There are several species of moles,
in the UK we have Talpa europaea and in America they have the genus, Scalopus.   Scalopus aquaticus in the east, Scapanus latimanus in California plus the Star Nosed mole Condylura cristata.
There are also moles in Asia and even South Africa.

Mole Jokes - Have a
Laugh at the Mole's Expense

Demoleition - The destruction which moles
bring to your lawn. (Or better the killing of moles)

Note 1: The mole is the Patron Saint of Chemistry

(As in 1 mole of magnesium, or a 1 mole solution of caustic soda)

Q: What do you get when you have a Company of moles
acting like idiots in their Citadels?
A: MoleAsses

Note 2:
Company is the collective noun for moles. Also Citadel is the name for lots of
mole burrows. Addendum: In Indian territory, a collection of moles with sharp
haircuts could be known as a Molehawk 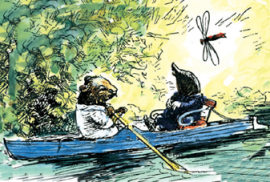 The Wind in the Willows written by Kenneth Grahame, features the animal
characters: 'Toad of Toad hall', Ratty and my favourite, Mole.

Here is an extract from the book which sets the scene:  'Hang spring-cleaning!' said
Mole and bolted out of the house without even waiting to put on his coat. Something up above was calling him imperiously, and he made for the steep little tunnel into the sunlight.

If you have any amusing pictures of moles, other animals or funny signs then do send them to us.