Kissing is a complex behaviour that requires significant muscular
coordination; just one kiss needs a total of thirty-four facial muscles
and 112 postural muscles. 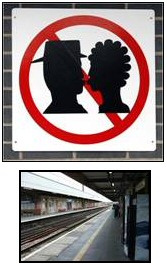 Just Kissed a Girl - And Liked It

Will and Guy can verify that the world kissing record has been won in
Mexico City when 39,897 people in the Zocalo [main square] locked lips
for ten seconds on 14th February 2009.

This beat the UK's record claimed by Weston-super-Mare, Somerset,
England in 2007.

Obviously Mexico City is a place where kissing in
public is acceptable. Will and Guy have discovered that there are places
that frown on and indeed ban kissing in public. These kisses are not
necessarily passionate or vulgar but are simply kisses of greeting or
farewell.  See
more about Valentine's Day kissing

Footnote:
Please send us your examples of funny kissing stories.