The purpose of this page is to act as a central source for our topics which have multiple pages,
spread over several sections.  For
example, we have collected links to videos of cats, pictures of cats and stories about cats all on one page.

Will and Guy are able to bring you news, from Cambridge University,
England, of the discovery of the world's oldest joke book.

Professor Mary Beard, a Cambridge academic, came across it while
researching ancient humour for a book. The third century book of jokes from
the Roman Empire is written in Greek and entitled Philogelos, which
translates as Laughter Lover. Professor Beard has informed us that,
'although they [the jokes] might not be side-splittingly funny, they do give
us a fascinating insight.'

Apparently the book contains its own ancient version of the "Monty Python
dead parrot sketch". It reads: 'A man buys a slave, who dies soon after.
When he complains, the slave seller replies, "Well, he didn't die when I
owned him".'

We think that this find is incredible and exciting and we look forward to
bringing you further jokes as they are revealed to the public.

Here are Snippets from our Pages of Humour and Funny Pictures

Mrs Mollard had been giving her second-grade students a lesson in
science.

She had explained about magnets and showed how they would pick up nails
and other bits of iron. Now it was question time, and Mrs Mollard asked, 'My
name begins with the letter "M" and I pick up things. What am I?'

Tim, a little boy in the front row proudly said, 'You're a mother!'

A Question of Physics

A college physics professor was explaining a particularly complicated
concept to his class when a pre-med student interrupted him.

'Why do we have to learn this stuff?' one young man blurted out.

'To save lives,' the professor responded before continuing the lecture.

A few minutes later the student spoke up again. 'So how does physics save
lives?'

The professor stared at the student for a long time without saying a
word. Finally the professor concluded, 'Physics saves lives,' he said,
'because it keeps the idiots out of medical school.'

Police are searching for an inept burglar who was beaten by his victim;
the beating was inflicted by a 42-year-old woman who discovered the man in
her back garden in Norwich, Norfolk, England. He tried to flee but got stuck
on a fence and the woman thrashed him with a bamboo cane.

This bungling burglar ran away and later knocked over a broom in a garden
nearby; he then, apparently became dazzled by a bright security light and
fell into a garden pond before making his escape. 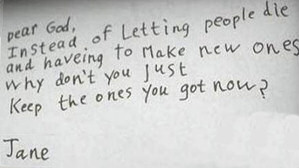 Darlene was sitting on her grandfather's lap as he read her a bedtime
story.

From time to time, she would take her eyes off the book and reach up to
touch his wrinkled cheek. She was alternately stroking her own cheek, then
his again. Finally she spoke up, 'Grandpa, did God make you?'

'Yes, indeed, poppet,' he said, 'God made you just a little while ago.'

Feeling their respective faces again, Darlene observed, 'God's getting
better at it, isn't he?'