Jewish jokes for Hanukkah, which is also known as Chanukkah or Menorah.

Clean and Funny Jokes for Hanukka 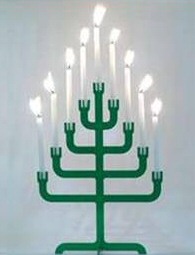 The Grandmother: a Funny Story

Last year, just before Hanukkah, Miriam, a grandmother was giving directions to her grown up grandson who was coming to visit with his wife. 'You come to the front door of the condominium complex.  I am in apartment 2B.' Miriam continued, 'There is a big panel at the door.  With your elbow push button 2B. I will buzz you in. Come inside, the elevator is on the right.  Get in, and with your elbow hit 2.  When you get out I am on the left.  With your elbow, hit my doorbell.' 'Grandma, that sounds easy,' replied Jonathan, the grandson, 'but why am I hitting all these buttons with my elbow.' To which she answered, 'You're coming to visit empty handed?'

Stamps At Hanukkah: A Droll Tale

Mary goes to the post office to buy stamps for her Hanukkah cards and she says to the cashier, 'May I have 50 Hanukkah stamps?' The cashier says, 'What denomination?' Miriam says, 'Oy vey, has it come to this? OK, give me 6 Orthodox, 12 Conservative, and 32 Reform.'

The Amusing Story of the 2 Sweaters

My mother once gave me two sweaters for Hanukkah. The next time we visited, I made sure to wear one. As we entered her home, instead of the expected smile, she said, 'Aaron, what's the matter? You didn't like the other one?'

Rudi, The Village Rabbi: A Short Joke to Laugh At

It was Hanukkah and the tiny village outside Budapest in Hungary was frightened that they may not have any latkes [pancakes] because they had run out of flour.

Rudi, the Rabbi, was called upon to help solve the problem. He said, 'Don't worry, you can substitute matzo meal for the flour, and the latkes will be just as delicious.' Sarah looks to her husband and says, 'Samuel, you think it'll work?' 'Of course,' Samuel replies, 'Everybody knows Rudolph the Rab knows grain, dear.'

If Your Computer were Jewish

Your "Start" button would be replaced with a "Let's go. I'm not getting any younger" button. Year 2000 problems are replaced by "Year 6000" problems. Hanukkah screen savers will have "Flying Dreidels". Your PC shuts down automatically at sundown on Friday evenings. After your computer dies, you would dispose of it within 24 hours. Internet Explorer would now have a spinning "Star of David" in the upper right corner. See more clean but funny Jewish jokes.

Admiring the Christmas trees displayed in his neighbour's windows, Nathan asks his father, 'Daddy, can we have a Hanukkah Tree?' 'What? No, of course not.' says his father. 'Why not?' asks Nathan again. Bewildered, his father replies, 'Well, Nathan, because the last time we had dealings with a lighted bush we spent 40 years in the wilderness.' See more funny religious Christmas jokes.

Hanukkah is a Jewish holiday celebrated for eight days and nights. It starts on the 25th of the Jewish month of Kislev, which coincides with late November - late December on the secular calendar. In Hebrew, the word "hanukkah" means "dedication." The name reminds us that this holiday commemorates the rededication of the holy Temple in Jerusalem following the Jewish victory over the Syrian-Greeks in 165 BCE [Before the Christian Era]

Menorahs Cause 10% More Fires in Jerusalem

Many Jews light menorahs, but sometimes too close to the drapes. Fire department spokesman Asaf Avres says the menorahs children make in kindergarten often topple over, posing another fire threat. He says Hanukkah is typified by a jump of 10 to 15 percent in house fires. Firefighters released safety guidelines for the eight-day holiday, which began Wednesday. They recommend keeping fire extinguishers or buckets of water close at hand.

Here Are the Secular Dates for Hanukkah 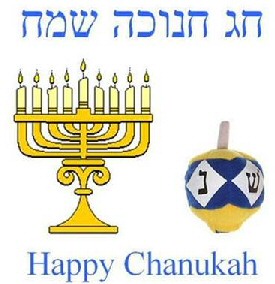 Footnote Will and Guy are keen to learn more about Hanukkah, so please send us your stories and interesting information.