The
date is the last day of October.  The sun set 5 hours ago, Halloween
approaches.  Imagine you are walking past a church yard.  You
suspect that the graves are haunted.

A Coven of Witches (Wicce) 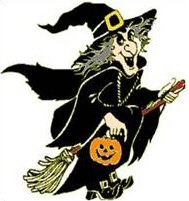 Did you know that a coven of witches, means a gathering of 13 witches.  Unfortunately, for some of us, a coven of witches can gather not just at Halloween, but at any time of the year.  Sister, mother, aunty .... hmm that's a lot of witch power.

English has many nouns which apply to either gender for example, child, spy, or even angel.  Originally witch was one of these neutral words, but increasingly, witch is a female preserve, and the equivalent male
word became warlock.

There are other older words for witch, and they do have gender specific endings, wicca (male) and wicce (female).  Curiously, the plural of wicca and wicce is wiccan.

The oldest pre-Christian meaning for wicce and wicca includes fortune-teller as well as creator of sorcery, medicine and black magic.  As with many ancient cults, most of the wiccan secrets were passed on
by word of mouth.  Then just when information started to be written down, witches were literally hunted down and killed, thus not much incentive for them to write things down. Indeed, the 't' first appears
in the word wiTch in reference to witch hunts in the 16th century.

Another
Anglo-Saxon documents have the spelling as 'Wica'.  Many Saxon
tribes had a 'wise man' or 'wise woman', who were consulted for potions
to cure illnesses.  It was a natural development of human nature to
produce magic potions, which may (or may not) act as love charms, or
spells to satisfy peoples' desires.

Films Featuring a Coven of Witches

Beware! Witches on the Loose

Footnote:
We are on the lookout for more Halloween
Animations if you have any please email us.