Question: Why do Giraffes have long necks?
Answer: Because their feet smell.

John strolls into a bar with a giraffe and they sit down on two stools at the front and the guy says to the bartender," Two beers please bartender."

The two have had about 12 beers each when the guy looks over at the giraffe who is starting to
wobble on his stool......his wobbling gets worse and worse and eventually he just passes out and falls backwards off the stool onto the floor.

John looks at him and then gets up off his stool and starts
walking out of the bar.

The bartender then yells at the guy as he is leaving, "OY...you can't leave that lyin' there."

John looks at the giraffe and then replies, "That's not a lion that's a giraffe,"
and walks out. 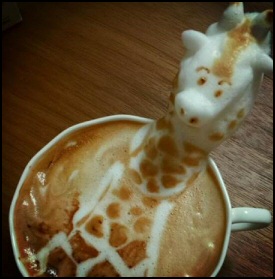