The definition of a gaffe is a mistake or
indiscretion, usually made in a social environment.  Here are examples which Will and Guy have unearthed. 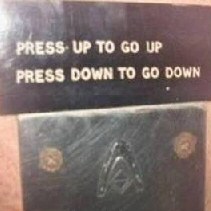 Recently published in the British National Daily Newspapers we have found
that the brightest and cleverest folk in our country are prone to making
gaffes and blunders, particularly in their examinations. Here is a random
selection from this year's exam papers:

A further gem follows when an economics student at
City University in London student who attributed Northern Rock's downfall to
the 'laxative enforcement policies'.

A student at the University of
the West of England in Bristol astonished his tutor by spelling the subject
of one of his favourite topics wrong: 'alchol' instead of 'alcohol'.  Another
wrote 'whom' instead of 'womb' in an anatomy paper, and one replaced the
word 'abdominal' with 'abominous'.

A fellow undergraduate concerned
by the threat of diseases, wrote: 'Control of infectious diseases is very
important in case an academic breaks out.'

Other examples come from
students at St Helens College of Art and Design near Liverpool, who were
asked to 'outline the importance of the four Noble Truths to the Buddhist
faith'. One offered the baffling response: 'Nirvana cannot be described
because there are no words in existence for doing so. Not non-existence
either, it is beyond the very ideas of existing and not existing.'

My car got hit
by a submarine: written on an Insurance claim form. [The Navy informed the
wife of a submariner that the craft was due in port. She drove to the base
to meet her husband and parked at the end of the slipway where the sub was
to berth. An inexperienced ensign was conning the sub and it rammed the end
of the slip, breaking a section away, causing her car to fall into the
water. The Navy paid the compensation claim.]

Other Types of Gaffes Include: