Look out for our silly frog jokes and stories in amongst the funny frog
pictures.

This is probably a tree frog.  A wild guess:- a young crocodile has tried to snatch the frog, but the amphibian is just too quick and avoids the jaws.  See a picture of the world's biggest crocodile.

What's green with red spots?
A frog with the chicken pox!

What's green with bumps?
A frog with the measles! 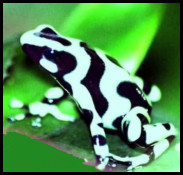 Fear of frogs is known as: Ranidaphobia.  If you have ever thought about arrows poisoned with frog venom then it is understandable that you develop a mistrust of frogs.  See frog picture opposite.

While these frogs are
deadly poisonous, scientists are investigating diluting their secretions and using them for medicinal purposes.  One problem facing the scientists is that the frogs loose their poisons in captivity.
See the picture of the frog to the right.

I went fishing this morning but after a short time I ran out of worms.
Then I saw a cottonmouth with a frog in his mouth. Frogs are good bass bait.

Knowing the snake couldn't bite me with the frog in his mouth I grabbed
him right behind the head, took the frog, and put it in my bait bucket.

Now the dilemma was how to release the snake without getting bit. So, I
grabbed my bottle of Jack Daniels and poured a little whiskey in its mouth.
His eyes rolled back, he went limp.  I released him into the lake
without incident and carried on fishing using the frog.

A little later, I felt a nudge on my foot. There was that same snake with
two frogs in his mouth.

Life is good in the South.

A state of emergency has been declared on Big Island, Hawaii because of an infestation of noisy frogs. Originally from Puerto Rico the coqui frog arrived on the island hidden in tropical plants. The coqui
frog is extremely noisy at night and literally makes a shrieking noise.

On their home island there are approximately 8,000 frogs per acre: however, on Big Island, this rises to
some 80,000 per acre. Local residents say the frogs have no natural predators so they have raised $15,000 to fight the frogs with hydrated-lime spray.

Why are frogs always so cheeky?  Moreover, frogs always seem full of tricks, perhaps this is
an illusion caused by their metamorphosis from tadpole to adult. 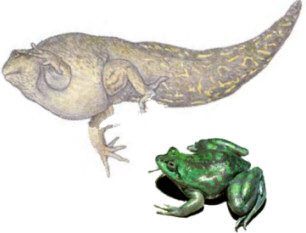 The 'Paradox' Frog has been known for a long time in South America.  It
owes it's name to the fact that it's children - tadpoles - are considerably
bigger than the adult frogs.  Paradox tadpoles can reach 10 inches, whereas
adult frogs are only 2 inches maximum.

It is funny to see the tadpoles alongside their parents.
The picture to the right, underestimates the size difference.  You can also
imagine how if the tadpole's tail shrank, then it's overall size would
approximate to that of the adult paradox frog.

What's new with the 'Paradox Frog' is that an investigation of this shrinking phenomenon has discovered a
protein called pseudin-2 that stimulates the frog to release insulin.  The
benefit is that this chemical can help people suffering from type 2 diabetes.

Diabetes suffers already benefit from investigation of drugs in the saliva of
the lizard Gila.  However, this giant lizard is an endangered species,
moreover the paradox frog produces more and better secretion containing
pseudin-2.

Footnote:
One reader wrote in to say that the tadpole was making a rude sign with its
foreleg.  Funny what some people read into a frog photograph.

It was discovered on a space mission that a frog is able to vomit. The frog throws up its stomach
first, so the stomach is dangling out of its mouth. Then the frog uses its forearms to dig out all of the stomach's
contents and then swallows the stomach back down again.

Scientists discovered a 'devil frog' that lived about 70 million years ago.
They unearthed the fossil in Madagascar.  It was so viscous that it may
have eaten baby dinosaurs.  This beast is much bigger than any frog living
today and is probably the largest frog ever to have existed, according to
palaeontologist David Krause of Stony Brook University in New York.

See the well preserved, funny frog picture to the right, taken by by Miss Pulla Your-leg. 70
million years ago in a Madagascan swamp.

Its name, Beelzebufo ampinga, was derived from Beelzebub, which the Greek for
devil, coupled with bufo the Latin for toad.  Ampinga means 'shield', and
refers to the armour-like part of its anatomy.  The Devil Frog was 16
inches long and weighed an estimated 10 pounds (4.5 kg).   One feature
is its very wide mouth, which conceals powerful jaws.  Think of a frog
coloured basket ball and you get the picture.

Beelzebufo probably didn't eat daintily, even by frog standards. It's quite
likely that Beelzebufo trapped and killed lizards, it is even possible that it
preyed on hatchling dinosaurs, thus speeded up their extinction.

I Think it's Time for a Rest 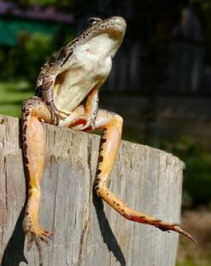 What kind of shoes do frogs wear?
Open toad!

What do you call a frog with legs?
Dinner.

Andy Maddox confirms that the toad in the picture has prominent cranial
crests, warty skin and parotid poison producing glands.  These are all
characteristics of the true toads in the family Bufonidae, and thus
distinguish this him from the funny frogs that you see elsewhere on this
page.

The most famous frog legend is Grimm's fairytale of the Frog Prince.
In a nutshell, the princess is upset; she sees a frog, talks to him and trusts him.
The princess promises to let the frog into her palace, whereupon he turns into a
handsome prince.

He explains that a spiteful fairy turned him into a frog, and to get out of
the spell he had to sleep upon a princess's pillow for 3 nights.  They ride
off into the sunset in the princess's carriage, which magically appears.
(Kissing the frog to break the spell is a modern embellishment.)

A frog annoys a crane in their pond.  The frog keeps croaking and
boasting that he is king of the pond.  One twilight the crane decides to
stalk the frog and teach him a lesson.  Just as the crane snatches the frog
in his beak, so a fox hears the commotion and kills the crane.  Whereupon
the frog escapes back into the pond.  The legend says that the frog never
boasted again.