Will and Guy are building up a collection of funny follies and strange
structures.

What is a Folly
House, and Why Were They Built?

Follies can regularly be found around the UK write Will and Guy. They are
fascinating remnants or relics from the past and often point to the
idiosyncrasies of their builders or owners.  Furthermore, many British
follies can be viewed from a passing car or by exploring on foot.  So what
are these strange monuments?

1. Jack the Treacle Eater - Funny Folly House
One
story heard by Will and Guy is that of "Jack the Treacle Eater".  The
legend tells us that Jack
was a local runner whose role was to carry messages for the Messiter family
of Barwick Park, to London and back; we were told that he trained on
treacle, to keep him going and hence his name.

2. Eyecatcher
Below we have searched out an "eyecatcher" folly
which still may be seen at Upcott House, North Devon, England. Built round
about 1800; it can be seen from the main house and was built in the style of
a *Gothic ruin. The idea of erecting a "ruin" causes some mirth in Guy and
Will's households.

*Gothic: Gothic architecture is a style of architecture which flourished
during the high and late medieval period. It evolved from Romanesque
architecture and was succeeded by Renaissance architecture. It originated in
12th-century France and continued into the 16th century; many churches and
cathedral were built in this style.

The
100ft Folly Tower lies to the east of the market town of Faringdon, in
Oxfordshire.

Farington is claimed by some to be the last true folly built in England.
What makes this folly curious is that at the insistence of Lord Berners it
was topped with gothic flourishes and mock battlements, and this was 1935
and not 1635.

Folly Hill, on which the tower stands, is 447 feet above sea level and on
a clear day Will and Guy were told you can see for about 25 miles.

4. The Folly House in the Clouds
The house
in the clouds is one of Britain's best known follies and can be found in the
beautiful countryside near the village of Thorpeness, north of Aldeburgh,
Suffolk. Now a holiday letting; people come from far and wide to stay in the
property.

It was built in 1923 as the Thorpeness water tower, disguised as a house
to avoid it being an eyesore. Originally it was a five storey house
underneath the water tank, which itself was hidden by enclosing it in a
house-like structure complete with pitched roof. Later, when Thorpeness was
linked to a mains water supply, the tank inside was dismantled and the space
turned into additional living accommodation making the folly house you see today.

A recent addition to the world of follies can be
seen in West Sussex, in Goring-by-sea, a picturesque Sussex village.  A
retired teacher living in Goring-by-Sea spent more than a year creating a
strange combination of tower, summer house and grotto in his back garden.
The art form, although less popular in these days, has not entirely
disappeared. 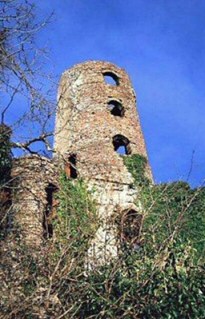 When Will was young he often went into the countryside. It was on
one of these excursions that he found Racton ruin. It can be seen close to
the village of Funtingdon, near Chichester, West Sussex, England. We have
established that its original purpose is uncertain, but it might have been
intended as a summerhouse to complement the main Stansted House, nearby.

An alternative possibility, which we favour, is that it was built by the
then owner so that he could see his trading ships berth at Emsworth, then a
major port and now a beautiful small town worth visiting.  Either way,
some folk have told us that it perhaps qualifies today more as a curiosity
than a folly.

While this is a sad picture, it does stimulate the imagination.
Firstly there is a play on words, Racton - rack and ruin, then thoughts turn to what
happened in those great holes that were once windows........

This is a sunset over the Folly River, which flows next to Folly Beach, a
beach town, near Charleston. This picture was taken by Sasha Azevedo of
Charleston, South Carolina, USA.

These cubic houses came about from a design by Piet Blom in Rotterdam,
Netherlands.  The concept is of a a forest, thus to get the full effect you
need to view a street of these cubic houses.  (See photograph to the right)

Footnote:
Please send us your funny pictures of funny follies