It has to be said that researching this topic is tempting fate, but just
as flames can be mesmerising, so we Will and Guy find funny fire safety
pictures hypnotic. 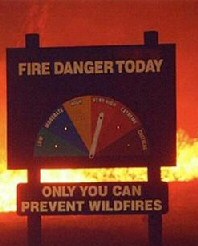 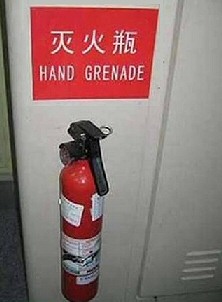 Every Little Helps?   Too Little too Late?

Legendary weather forecaster Sonny Elliot of WWJ 950, once told of a man
who had two wooden legs:-

His house caught fire.  A neighbour called 911 and firemen
responded. They saved the house but the man burned to the ground. 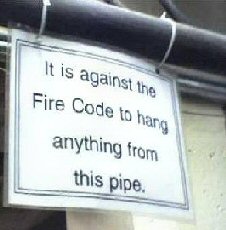 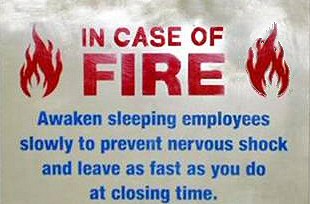 Sitting through fire safety and prevention programs can make anyone nod
off.  So the instructor tried to lighten the mood by going around the
room asking where all the guests were from.

'Burnt Mattress, Arkansas,' called out the friend sitting next to me.

'Burnt Mattress?' said the instructor, suppressing a laugh. 'I've heard
some unusual town names before, but never that one. Where's it located?'

My friend shot back, 'Right above Hot Springs.'

Over lunch Martha said she hadn't the heart to tell the group that she
was from Firetown, Connecticut.

On a more serious note... get advice from the experts for
safety, liability and property risk

Break This Wall To Escape

Strange, Bizarre and Hilarious Call Outs to the Fire Brigade

Funny Firefighter Reports from Middle England As told to Will and Guy, we
can bring to you these examples of bizarre 'phone calls to the Fire Stations
of England 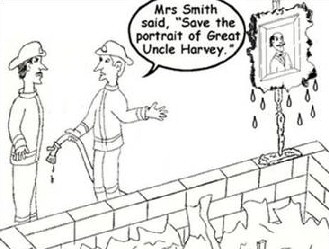 Neil Mayne, a firefighter for nearly 30 years informed us, 'You do get
some strange ones. We've got all sorts of equipment to help free people,
from the big jaws of life we use to pull mangled cars apart to smaller
cutters for delicate work in sensitive areas.'

Two ladies were discussing the merits of policeman and fireman's
functions.

Edna: Why is it that fireman always seem to have bigger balls than
policeman?

Joyce: Why, it's because they sell more tickets.