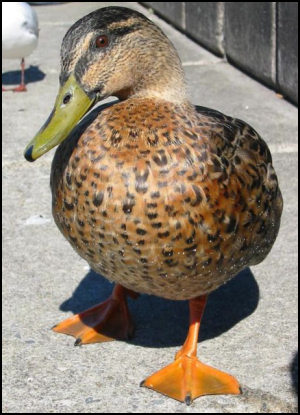 Here is her husband - the drake 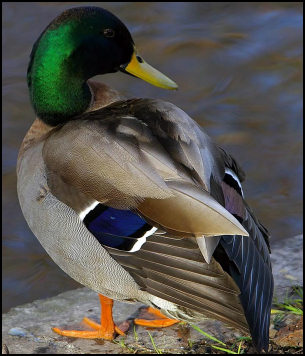 The drake has the iridescent green head and the blue band in his feather.

This is the Story of the Ducks' Ban

Ducks are to be banned from a village pond. The mallards have been branded a menace by officials because they are eating the frogspawn. The community council in Creigiau, near Cardiff, has ordered the birds to be relocated to another pond. According to the Daily Express council secretary Alec Davies said, 'There are almost no frogs, newts and stickleback in the pond this year. The ducks are destroying the habitat and we have made a decision to relocate them.' Villagers are furious with the council's plans. Local Andrew Wigley-Jones said, 'My 3 year old daughter loves going to see the ducks. They are part of the character of the village and bring the community together.' A RSPB spokesman said, 'There are lots of other reasons why frogspawn has been delayed this year, including the fact that it has been particularly cold. The main problem with ducks is that if you relocate them there is nothing to stop them from flying back.'

Five doctors went duck hunting one day. Included in the group were a general practitioner, a paediatrician, a psychiatrist, a surgeon and a pathologist. After a time, a bird came winging overhead. The first to react was the general practitioner who raised his shotgun, but then hesitated. 'I'm not quite sure it's a duck,' he said, 'I think that I will have to get a second opinion.' Of course, by that time, the bird was long gone. Another bird appeared in the sky soon after. This time, the paediatrician drew a bead on it. He too, however, was unsure if it was really a duck in his sights and besides, it might have babies. 'I'll have to do some more investigations,' he muttered, as the creature made good its escape. Next to spy a bird flying was the sharp-eyed psychiatrist. Shotgun shouldered, he was more certain of his intended prey's identity. 'Now, I know it's a duck, but does it know it's a duck?'The fortunate bird disappeared while the fellow wrestled with this dilemma. Finally, a fourth fowl sped past and this time the surgeon's weapon pointed skywards and he fired without hesitation. 'BOOM.' The surgeon lowered his smoking gun and turned nonchalantly to the pathologist beside him, 'Go see if that was a duck, will you?'
Question: What do you call a duck that just doesn't fit in? Answer: Mallardjusted.
Footnote: Please send us your funny duck story