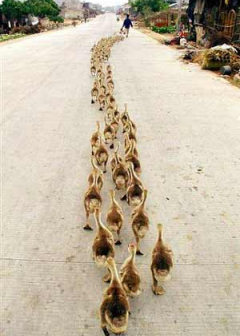 Here is Will and Guy's collection of jokes, funny stories and videos on the subject of ducks and chickens.

Ann Martin, 63, of Portesham, Dorset taught ducks to follow her from a nearby pond, and then to cross the road.  Ann's idea is to slow speeding drivers, especially during the rush hour.  Ann Martin, who is a local postmistress, said that drivers heading into Weymouth 'use the village as a rat-run'.

A duck walks into a shop, and asks for a red lipstick. The cashier says, "Cash or check?" and the duck says, "Just put it on my bill." 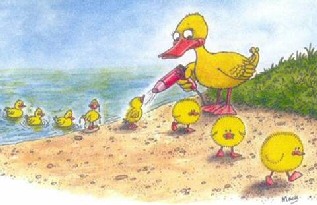 Billy, the travelling circus owner, walked into a bar to see everyone crowded around a table watching a show. On the table was an upside down pot and a duck tap dancing on it. Billy was so impressed that he offered immediately to buy the duck from its owner. After some negotiations, they settled on a figure of $20,000 for the duck and the pot. Four days later the circus owner, Billy, runs back to the bar in anger and shouts, 'Your duck is a rip off! I put him on the pot before a whole audience, and he didn't dance a single step.' 'So?' asked the ducks former owner calmly, 'did you remember to light the candle under the pot?'

A duck goes into a bar and says, 'I would like a drink. I am old enough.' The bartender replies, 'You need to be able to prove who you are.' The duck pulls out a mirror. He looks in it, nods his head, and says, 'Yep, that's me.' 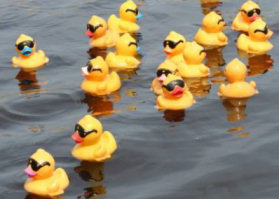 Alice and Emile went for a meal at a Chinese restaurant and they order the 'Chicken Surprise.'  The waiter brings the meal, served in a lidded cast iron pot. Just as Alice is about to serve herself, the lid of the pot rises slightly and she briefly sees two beady little eyes looking around before the lid slams back down. n. 'Good grief, did you see that?' she asks her husband, Emile.  He hasn't, so she asks him to look in the pot. Emile reaches for it and again the lid rises, and he sees two little eyes looking around before it slams down. Rather perturbed, he calls the waiter over, explains what is happening, and demands an explanation. 'Please sir,' stammers the waiter, 'what you order?' Emile replies, 'Chicken Surprise.' 'Ah! So sorry, is mistake' says the attendant, 'I bring you Peeking Duck!'
Question: What do you call a crate of ducks? A box of quackers

The Kiss of Life Chicken Style

Marian Morris from Arkadelphia, Arkansas, resuscitated her brother's pet chicken Boo Boo, and saved it's life, after it was found floating face down in the family's pond. Mrs Morris, a retired nurse, said, 'I breathed into its beak, and its eyes popped open. I breathed into its beak again, and its eyes popped open again.  'I said, 'I think this chicken's alive now. Keep it warm.' Boo Boo got her name because she is easily frightened. It is thought she flopped into the pond after being startled. She made a fully recovery reports The Sun online. 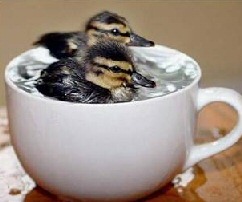 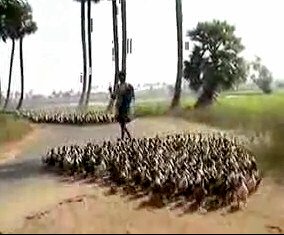 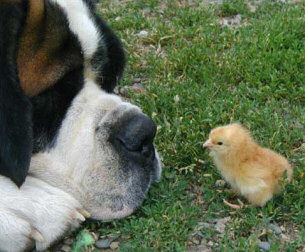 An Amusing Short Duck Story From Will and Guy 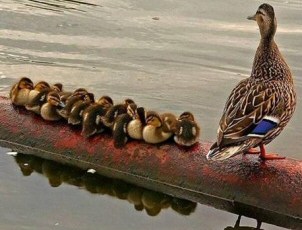 The fluffy new family had to be escorted to safety by shop staff after the ducklings hatched on a wall in the backyard of the Kidney Research UK charity store in St Ives, Cambridgeshire, England.  Their journey involved a 100-yard waddle through the store, across pavements and over a busy road to the River Great Ouse quayside, where they plopped three feet down into the water. Dozens of shoppers stopped and watched in amazement as the mallard and her ducklings ignored the bustle on the street and set off for a dip. Shop manager Carol Andrews informed Will and Guy that she has been chaperoning ducks through the store each Spring since it opened seven years ago. Every year Mrs Andrews makes a ramp so the mother duck and her brood can get out of the yard and into the storeroom. She then helps them make their first journey to the river, guiding them through traffic and pedestrians. She believes it is the same mother duck who returns to have her ducklings in the safety of the enclosed back yard. The *RSPB said it was unusual for ducks to nest in such a way but commended the shop's staff for accommodating the mallard's curious choice. A spokesperson told us, 'Ducks tend to nest on the ground, so it's quite unusual for one to nest on top of a high wall but it does happen. We have records of ducks nesting on balconies, especially if there is a lot of pressure for space. If this duck knows it is has been safe on the wall in the yard in the past then she will go back.' *Royal Society for the Protection of Birds [UK]

7 Meanings of Duck in the English Language 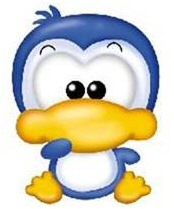 Cockney Meaning of Duck Duck and Dive is cockney* rhyming slang for "Hide". *Cockney rhyming slang is not a language but a collection of phrases used by "Cockneys" and other Londoners. A true "Cockney" is someone born within the sound of Bow Bells. [St Mary-le-Bow Church in Cheapside, London, England]. Examples include: