Sid was travelling down a country road in his native Yorkshire, England when he saw a crowd of people gathering outside a farmhouse.

It was a cold November afternoon, so he stopped and asked Farmer Ellis why such a large crowd of men was gathered there. The farmer replied, 'Jo's donkey kicked his mother-in-law and she died.' 'Well, 'replied the man, 'She must have had a lot of friends.' 'Nope, 'said Farmer Ellis.' We all just want to buy his donkey.'

There was a young man named Ahmed who bought a donkey from old farmer Farouk for $100.00. The farmer agreed to deliver the donkey the next day. When Farouk drove up the next day he says, 'I am sorry but I have some bad news - the donkey is on my truck but he be dead.' Ahmed replies, 'Well then, just give me my money back.' 'Can't do that,' burrs the farmer, 'I went out and spent it already.' Ahmed sighs, 'OK just unload the donkey anyway.' Farouk then asks, 'What are you gonna do with a dead donkey an' that?'  I'll raffle him off,' laughs Ahmed. The farmer exclaimed, 'Aargh, you can't raffle off a dead donkey.' But Ahmed with a big smile on his face tells Farouk, 'Sure I can. Watch. Just don't tell anyone the donkey is dead.' A month later the farmer Farouk met up with Ahmed and asks, 'Whatever happened to that dead donkey?' 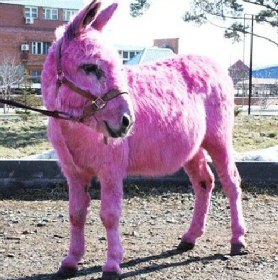 Ahmed answers, 'I raffled him off. I sold 500 tickets at $2.00 each and made a huge profit.' Totally amazed the farmer Farouk enquires, 'Didn't anyone complain that you had stolen their money because you lied about the donkey being dead?' 'The only one who found out about the donkey being dead was the raffle winner,' chuckled Ahmed, 'so when he came to claim his prize I gave him his $2.00 back plus $200.00 extra, which is double the going value of a dead donkey, so he thought I was a great fellow.' See more farmer jokes 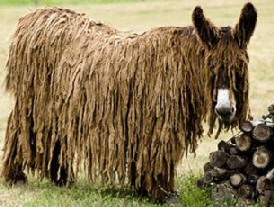 Arnie, a young American, was on a short break holiday in Piddlehinton in the Dorset countryside.  The next day he was going for a job interview in London but he needed to ask for directions, so he spoke to local farmhand, Martin. 'Yo, feller, could you possibly tell me the quickest way to London?' Martin replied in a rich Dorset country accent, 'You driving or walking, lad?' Arnie quickly replied, 'Driving.' Martin, the farmhand nodded wisely, saying: 'Oooh aargh, that be certainly the quickest way'.

One day a farmer's donkey fell down into a well.  The animal cried piteously for hours as the farmer tried to figure out a way to get him out. Finally he decided it was probably impossible and the animal was old and the well was dry anyway, so it just wasn't worth it to try and retrieve the donkey.  So the farmer asked his neighbours to come over and help him cover up the well. They all grabbed shovels and began to shovel dirt into the well. At first, when the donkey realized what was happening he cried horribly. Then, to everyone's amazement, he quieted down and let out some happy brays.  A few shovel loads later, the farmer looked down the well to see what was happening and was astonished at what he saw.  With every shovel of dirt that hit his back, the donkey was shaking it off and taking a step up. As the farmer's neighbours continued to shovel dirt on top of the animal, he continued to shake it off and take a step up.  Pretty soon, to everyone's amazement, the donkey stepped up over the edge of the well and trotted off. Will and Guy consider that the moral of this tale is: Life is going to shovel dirt on you. The trick to getting out of the well is to shake it off and take a step up.  Through applying wisdom every adversity can be turned into a stepping stone.  The way to get out of the deepest well is by never giving up but by shaking yourself off and taking a step up. The moral of this donkey story is what happens to you isn't nearly as important as how you react to it. 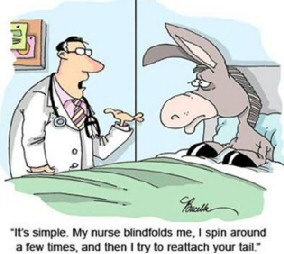 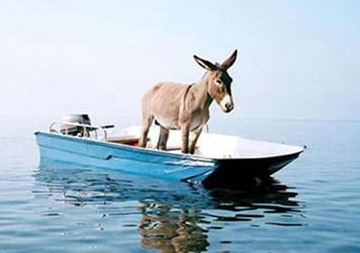 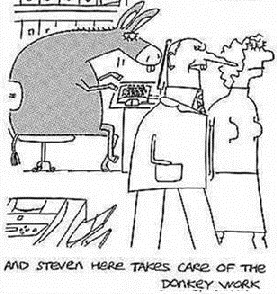 An American called Arnie was driving around Ireland, he began to have trouble with his car boiling over, so he stopped at a country cottage.  As was walking up the pathway Arnie noticed that a donkey, which was lying on the ground, was not shod. Anyway, Arnie knocked at door and an Irishwoman came out. He said, 'My car has boiled over could you let me have some water please?  And by the way Do you Know that your donkey over there has no shoes on? 'I know that', replied the woman replied, 'To be sure he's not up yet.'