It took me a while before I saw that fox

in amongst the pack of hounds. 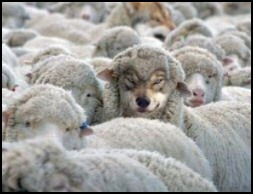 'Fox in Dogs' Picture by kind permission of Worth1000.com

When you are in deep trouble, say nothing, and try to look as though you know what you're doing.

What have we here?  How did that fox escape the pack of hounds?

After the fox and hounds, we have the fox and mouse.  While foxes do
indeed eat mice, we are only 90% sure this is a mouse and not a leaf.  What
ever it is, it sure has the foxes attention.  Below is a slightly enlarged
picture of the mouse.

Once again, a fox in deep trouble!

The Red Fox in Christmas Snow 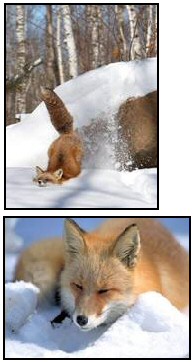 Will and Guy have found that, in their experience, people either love or
hate these attractive creatures.  Unlike the pack-forming grey wolves,
red foxes are solitary animals. Their home ranges may be shared with only
one or two members of the opposite sex.

Foxes stalk their prey just like cats. Also like cats, they often play
with their catch before they kill it. If they aren't hungry, they may even
catch mice just to play with, then let them go when they are done.  A
fox's hearing is so acute that it can hear a watch ticking some 40 metres
away.

Description: The Red Fox is about the size of a large cat. In fact,
although it is a member of the dog family, some of its habits are very cat
like as well. Appearance wise, it has a reddish coat with white underneath
and a big bushy tail with normally a white tip.

Habitat: Foxes live in many areas of the world. Will regularly has a
vixen and her cubs living near to the bottom of his garden in suburban
Hampshire, England. They can live in the deepest wilderness or right in your
backyard with equal ease.

Diet: Foxes are carnivores. That means that they eat other animals. Their
favourite food include rodents, rabbits and small birds. If they live near
people, they are famous for raiding hen houses and stealing chickens.

The Legend of the Fox and the Bear

Once upon a time the bear had a lovely big bushy tail.  One winter's day
a bear met a fox by the pool.  The fox was returning home with a fish and
the bear asked him how he caught such a tasty meal.  'I will show you' said
the sly fox.

The fox took the bear to a hole in the ice.  'What I do', said the fox,
'is put my tail down through the hole and wait until the fish bite, then I flick
up my tale and catch the fish.  See how I have a lovely big bushy tale,
just like yours'.

The bear put his tail into the icy water. 'Now this is vital' said the fox;
you must sit very still and think of carp, perch all your favourite fish'.
Well, the perishing cold soon got in the bear's bones and he fell asleep.
When it was light the fox returned from his den and woke up the bear saying, 'I
can see 3 fish on your tail'.  At which point the bear leapt up and his
lovely tail ripped from his back.

This is why bears nowadays only have stumps for tails; and why foxes and
bears are such sworn enemies.

Anuska the Fox with her Canine Chum Sadie the Jack Russell. 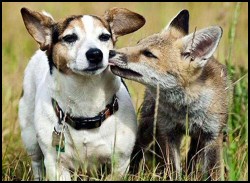 Anuska, now eight months old, was rescued by art teacher and
photographer, Brian Bevan. Just days after being born her mother was hit by
a car and Brian, from Bedfordshire, took the vulnerable cub into his home
after she was found by a farmer along with nine other cubs. Anuska
immediately formed a strong with 10-year-old, called Sadie and now the pair
can often be seen jumping around together - making for some unusual picture
opportunities for Brian.

Footnote:
Please send us your funny fox pictures
or stories.