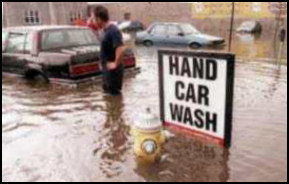 The Economic Disaster is So Bad That: 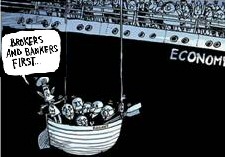 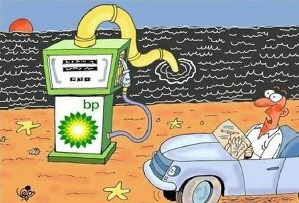 I've just been diagnosed with gammon flu.
I originally had
swine flu but I've been cured!

Dennis, a carpet fitter, had just
finished laying a carpet for Mrs Branch. He popped outside out for a smoke, only to realise that he had mislaid his cigarettes. He retraced his steps and saw in the middle of the room, under the carpet, what
appeared to be a small lump.

'No sense in taking up the entire carpet for one pack of cigs,' Dennis muttered to himself. So he took get out his hammer and flattened the hump with a couple of sharp blows.

Dennis began tidying up when Mrs Branch came into the room and handed him his cigarettes. 'I found them in the hallway.' she said, 'Now,' she continued, looking around the room imploringly, 'if only I could
find the canary.'

Jack the Treacle Eater - Funny Folly House
One
story heard by Will and Guy is that of "Jack the Treacle Eater".  The
legend tells us that Jack
was a local runner whose role was to carry messages for the Messiter family
of Barwick Park, to London and back; we were told that he trained on
treacle, to keep him going and hence his name.

Funny Disasters On and Off The Road

There have been some terrible road accidents, but this beer disaster must be one of the most exasperating.

Wait a minute in this funny beer pic can I see some intact bottles of Grolsch beer in the second crate from the front?  Does
anyone have a 10-20 on this Big-R?