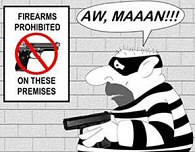 Here is Will and Guy's collection of dumb criminals and inept robbers from around the world.

A burglar was caught after he fell down a chimney while escaping over the roof of a house he had just broken into. Police in Maastricht, Holland, arrested the 33-year-old after being called out by the house owners who heard his calls for help. The man had tried to flee out of a roof window with his booty of cash and jewellery, but tumbled in the dark and got stuck inside the chimney.

A burglar who got stuck in a chimney while trying to break in to a Los Angeles home has been jailed for two years. Bungling burglar Marco Antonio Espinoza was also ordered to pay the owners of the house more than £5,000 [$9,993.20 USD] to repair the damage done when fire fighters freed him. When he was caught, he told the police that he was doing building work on the house. A 'would be' robber had to drop his bank looting plans after he forgot to take with him a bag into which the stolen money could be put. Apparently, the young man in his 20's, entered a local Chase Bank branch early on Monday morning and passed the cashier a piece of cardboard on which was written 'Give me your money,' reported the Detroit News. He told the bank teller to 'hurry up,' but when she asked him if he had a bag to put the money into he became flustered and confused and ran off without the cash.

A man in Mainz, Germany, apparently inebriated, was arrested after he attempted to hold up a bank armed with............... a water pistol and a potato peeler. Police say that the man, identified as 52-year-old Walter Schoegl, had a stocking over his head and was waving the potato peeler as he demanded cash. He left with nothing after the bank teller told him that they had run out of money. When he was arrested a some five minutes later he was still wearing the stocking on his head.

Mirna heard a rumour that Michael Douglas and Catherine Zeta Jones, who are currently cruising the Adriatic on a luxury yacht, were walking around the streets of her home town. She immediately grabbed her camera and hot-footed it out of her office; her job was in a Bureau de Change. She forgot to lock the doors. In the short time she was away from her work the bureau was emptied of several thousands of pound in a variety of currencies. Footnote: In cricketing circles they often say when Freddy Flintoff walks out to bat he clears the bars; well wags are now saying, 'When Michael Douglas and Catherine Zeta Jones walk out in town, they clear the shops.' 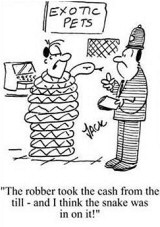 A suspected burglar put in handcuffs after his arrest, attacked a woman police officer and then escaped by driving off in her car.  The female officer was driving the man to Slough police station when he forcibly took control of the car. The man, one of three arrested on suspicion of burglary, dumped the car in Keel Drive about six minutes away. The suspect is described as Asian, in his mid 20s and about 5ft 8in tall. He may still be wearing handcuffs. A police spokesperson said, 'This is a serious incident which could have led to the officer and members of the public being seriously hurt. Thankfully, neither was injured, 'I would appeal to anyone who knows the whereabouts of this bungling burglar to contact us immediately.' See more funny crime stories.

One more for luck: If you don't answer when I knock, I try the door. Occasionally, I hit the jackpot and walk right in. This alternative, droll, useful and witty look at burglars was kindly sent in by Dave Foley, MBE.

Two robbers in Michigan, USA, entered a record shop nervously waving revolvers. The first one shouted, 'Nobody move!' When his partner moved, the startled first bandit shot him. 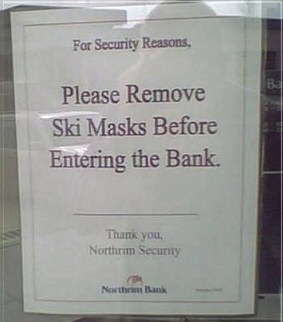 1. A man went into a drug store in Baltimore, pulled a gun, announced a robbery, and pulled a "Hefty-bag" face mask over his head. He then and realised that he'd forgotten to cut eyeholes in the mask. He was arrested by security men. 2. A Belgium news agency reported, last year, that a man suspected of robbing a jewellery store in Liege said he couldn't have done it because he was busy breaking into a school at the same time. Police then arrested him for breaking into the school. 3. Two men tried to pull the front off a cash machine by running a chain from the machine to the bumper of their pickup truck. Instead of pulling the front panel off the machine, though, they pulled the bumper off their truck. Scared, they left the scene and drove home... With the chain still attached to the machine... With their bumper still attached to the chain... With their vehicle's license plate still attached to the bumper. You couldn't make it up! 4. When a man attempted to siphon petrol from a motor home parked on a Seattle street, he got much more than he bargained for. Police arrived at the scene to find an ill man curled up next to a motor home trying to steal gasoline and plugged his hose into the motor home's sewage tank by mistake. The owner of the vehicle declined to press charges, saying that it was the best laugh he'd ever had. 5. Investigating a purse snatching, detectives picked up a man who fit the thief's description and drove him back to the scene. He was told to exit the car and face the victim for an ID. The suspect carefully eyed the victim, and shouted, 'Yeah, that's the woman I robbed.' 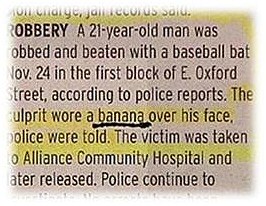 A bungling burglar in the USA has been arrested after he left his mobile phone on charge at the house of one of his victims. The man was disturbed while rifling through rooms in the house in Washington DC and jumped out of a window to escape Will and Guy have learned. 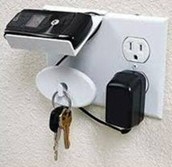 Police searched the house later and were surprised to find a cell phone, that didn't belong to anyone at the house, charging in a socket. Officers called one of the numbers in his contacts, told them the phone owner had been involved in an accident and asked for his name. That led to the 25 year old man being arrested and later charged with ten burglaries.

Robbers broke into the Telefonica Movistar cell-phone store in Morelia, Mexico recently with the aim of stealing some mobile phones. In their haste to get away they grabbed the first 'phones that came to hand - hollow replicas, used normally for display purposes only. Employees explained to Will and Guy that the bungling burglars overlooked real cell phones and cash in another part of the shop.

A 26-year-old man from Riverton, Wyoming, USA allegedly fled from a grocery store with a stolen bottle of Schnapps and a packet of cough sweets before hiding from the authorities in a nearby building. Only the nearby building happened to be the local Police Station. We couldn't make it up say Will and Guy. According to our contact, officers say the man was shocked to realise he had accidentally sought solace in a police station and tried to run from the office. However, he had already been spotted on CCTV footage.  The man, who was reportedly drunk, was soon apprehended and taken into custody on preliminary charges of resisting arrest and shoplifting.

Yet Another Clumsy Criminal Tale

A burglar from Colorado, USA, has been arrested after being identified by his distinctive facial tattoo. 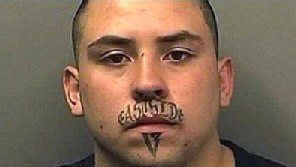 Gadzooks, what a surprise! Footnote Please send us your funny crime story.