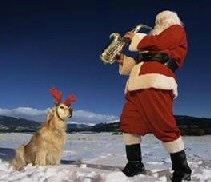 Romeo: What would it take to make you give me a kiss under the Christmas mistletoe?

Pupils at a school in Sweden are being terrorised by a drunken elk (Like reindeer, only smaller).  Police say the animal has probably been eating fermented apples in a garden, reports Sky News.

Jan Caiman, a police officer in Molndal, said, 'That could be the problem. We could be dealing with a boozy elk'. Elk can weigh as much as 1,000 lb and personnel at the school described the erratic male as 'completely mad'.  The receptionist at the school, near Molndal, in the south of the country, told the Gothenburg Post, 'The children are really scared'.  Police have contacted hunters and said that if the animal does not sober up and calm down, it could be shot.

Santa Claus received a parking ticket from an official in Brooklyn.

Word has reached Will and Guy that a New York parking official has penalised Santa Claus for a parking offence while delivering his presents to needy children.  Santa Claus [aka Chip Cafiero, a retired schoolteacher] received the $115 USD ticket in Brooklyn. Apparently he shouted to the official, 'Ho! Ho! Ho!' but he was completely ignored.

Santa claims that his horse-drawn carriage and a SUV carrying the toys was not causing an obstruction.  We are not able to raise a comment from the police but a local politician has said the parking ticket is 'ridiculous.'

Jim asked his friend, Tony, whether he had bought his wife anything for Christmas.

'Yes,' came the answer from Tony who was a bit of a chauvinist, 'I've bought her a belt and a bag.'

'That was very kind of you,' Jim added, 'I hope she appreciated the thought.'

Tony smiled as he replied, 'So do I, and hopefully the vacuum cleaner will work better now.'

Santa Banta goes into a bar in New York.

It was the day after Christmas at St Peter and St Paul's church in Borden, Kent, England. Father John, the vicar, was looking at the nativity
scene outside when he noticed the baby Jesus was missing from the figures.

Immediately, Father John's thoughts turned to calling in the local policeman but as he was about to do so, he saw little Nathan with a red
wagon, and in the wagon was the figure of the little infant, Jesus.

Father John approached Nathan and asked him, 'Well, Nathan, where did you get the little infant?'

Nathan looked up, smiled and replied, 'I took him from the church.'

'And why did you take him?'

With a sheepish grin, Nathan said, 'Well, Father John, about a week before Christmas I prayed to Lord Jesus. I told him if he would bring me a red wagon for Christmas, I would give him a ride around the block in it.'

Christmas Eve sermon: 'What is hell?' Come early and listen to our carol practice.

Home alone one Christmas, a Maine woman was in the doghouse when she called the "Butterball Turkey Talk-Line".

Apparently found Will and Guy, while preparing the turkey, her Chihuahua jumped into the bird's body cavity and couldn't get out. She tried pulling the dog and shaking the bird, but nothing worked. She and the dog became more and more distraught.

After calming the woman down, the Talk-Line home economist suggested carefully cutting the opening in the cavity of the turkey wider.

Mary-Jo was going to the Christmas office party but needed a new dress. So she went out shopping and in the clothing store she asked the assistant, 'May I try on that dress in the window, please?'

Will and Guy are building a collection of 'Right Christmas Presents' and 'Wrong Presents'.  Here are examples.

This looks like like a normal Pool ball but it has one difference, namely a bias which makes it wobble and go in all directions, except the one
intended.  Just watch the amazement on your opponents face, as after you have discretely substituted the 8 Ball, he tries his pot!

You can protect you pint with this Beer Burglar Alarm System. Attach the 'sucker' to the side of your beer glass or bottle, set the
proximity alert and walk away.  Whenever someone comes within 30cm (12 inches) of your beer the mafia style voice alert sounds: 'Keepa Da Hands off ma BEER!'

Pete bought his wife, Thelma, a beautiful diamond ring as her Christmas present.

After hearing about this extravagant gift, a John, his friend, commented, 'I thought she wanted one of those sporty four-wheel-drive vehicles.'

'Oh, Thelma did, Pete replied, 'But where on earth was I going to find a fake Jeep?'

'Twas The Day After Christmas

'Twas the day after Christmas and all through the house Children sat slack-jawed, bored on the couch.

Wrappings and toys littered the floor, An incredible mess that I did abhor.

With Mom in her robe and I in my jeans, We waded in to get the place clean.

When suddenly the doorbell: it started to clatter, I sprang to the Security-View to check out the matter.

The new-fallen snow, now blackened with soot, Was trampled and icy and treacherous to foot.

But suddenly in view, did I gasp and pant: An unhappy bill collector and eight tiny accountants.

The door flew open and in they came, Stern-looking men with bills in my name.

On Discover, on Visa, on American Express, On Mastercard too, I sadly confess, Right to my limits, then beyond my net worth, Over the top I had charged, in a frenzy of mirth.

The black-suited men, so somber, so strict, I wondered why me that they had first picked.

They stared at me with a look I couldn't miss,That said "Buddy, when are you for paying for this?"

I shrugged my shoulders, but then I grew bolder, Went to the cabinet and pulled out a folder.

"As you can see," I said with a smile, "It's bankruptcy that I'll have to file!" And with a swoop of my arm, my middle digit extended
I threw the bills in the fire: the matter had ended.

The scent of burnt ash came to my nose, As up the chimney my credit-worthiness rose.

Without another word they turned and walked out, Got into their limos, but one gave a shout: "You may think that's the answer to all of
your fears, But it's nothing you'll charge for at least seven years! by David Frank

Twas The Night Before Christmas

Twas the night before Christmas, when all through the house Not a creature was stirring, not even a mouse; the stockings were hung by the chimney with care, In hopes that St. Nicholas soon would be there.