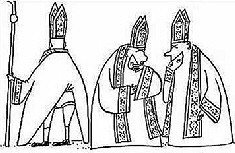 We thought long and hard before creating this page of
Christian jokes.  What swayed us towards publishing these clean yarns,
was the thought: 'Why should the devil have all the best jokes?' 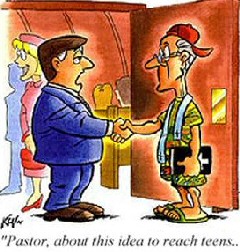 Father Brian, an elderly Catholic priest, was speaking to Father Karl, a
younger priest, saying, 'You had a good idea to replace the first four pews
with plush bucket theatre seats. It worked like a charm. The front of the
church always fills first now.'

Father Karl nods, and the old priest continues, 'And you told me adding a
little more beat to the music would bring young people back to church, so I
supported you when you brought in that rock 'n' roll gospel choir. Now our
services are consistently packed to the rafters.'

'Thank you, Father Brian,' answers the young priest. 'I am pleased that
you are open to the new ideas of youth.'

'All of these ideas have been well and good,' comments Father Brian
wisely. But I'm afraid you've gone too far with the drive-thru
confessional.'

'But, Father Brian,' protests the young Father Karl, 'My confessions have
nearly doubled since I began that!'

'Indeed,' replies the elderly priest, 'And I appreciate that. But the
flashing neon sign, "Toot 'n Tell or Go to Hell" cannot stay on the church
roof.'

Henry Marks, a collector of rare books ran into an acquaintance, Arnold,
who told him he had just thrown away an old Bible that he found in a dusty,
old box. He happened to mention that Guten-somebody-or-other had printed it.

'Not Gutenberg?' gasped Henry.
'Yes, that was it,' remembered Arnold.

'You idiot' Henry exploded, 'You've thrown away one of the first books
ever printed.  A copy recently sold at auction for half a million dollars.' 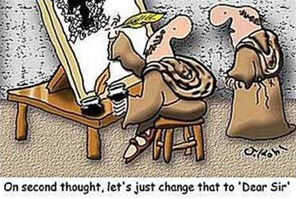 'Oh, I don't think this book would have been worth anything close to that
much,' replied Arnold. 'It was scribbled all over in the margins by some guy
named Martin Luther.'

Laugh Along with Will and Guy's Short But Funny Christian Jokes

Tricky manoeuvre
Mrs Marble, a Sunday School teacher
was describing that when Lot's wife looked back at Sodom she turned into a
pillar of salt, when little Percy interrupted. 'My mummy looked back once
while she was driving,' he announced, 'and she turned into a telephone
pole.'

A narrow escape
The Reverend Douglas Johnston was not the best of drivers.  One Sunday he was driving home from church when unfortunately, he had a minor bump with cyclist.  The poor man was knocked off his bike
into the ditch.  The Vicar naturally stopped his car, got out and profusely apologised and gave the cyclist his calling card
saying that if he could ever be of help, then the man should not hesitate to ask.

As the man rode home he looked at the card which said, 'The Reverend Douglas Johnston is sorry he missed you today.'

Carolyn Heap, another Sunday School teacher, said to her children, 'We
have been learning about how powerful the kings and queens were in Biblical
times.  But there is a higher power.  Who can tell me what it is?'

George blurted out, 'I know, Aces.'

Footnote:
It's amazing with humor how one joke
reminds you of another ....

Evensong With a Funny Twist

It was an evening church service at St Mark's in the small quiet town of
Orson, Maryland, USA, and old Deacon Carrick seemed to be sleeping as he
occupied one of the back pews.

In those bygone days, some of the cardinal sins were: chewing tobacco,
drinking liquor and playing cards. The message had already been preached,
and the reverend was winding up the service.

He said in his usual tone, 'Deacon Garrick, will you lead in prayer?' But
the old deacon was fast asleep.

Then the reverend father said in a
little louder and sterner voice, 'Deacon Garrick, will you lead in prayer?'
But still the old fellow still did not respond.

Finally, the vicar shouted, 'Deacon Garrick, will you lead?'
This
time, the old Deacon jolted awake, and, not realizing where he was blurted
out, 'It's not my lead - I just dealt.' 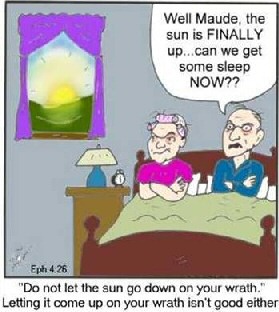 Young Mia came home from Sunday School and told her mother that she had
learned a new song about a cross-eyed bear named "Gladly".  It took her
mother a while before she realised that the hymn was really "Gladly The
Cross I'd Bear."

Going over our church finances I found a receipt from a local paint store
signed by someone named Christian. I wasn't aware of anyone buying paint, so
I called the store to point out its mistake

'I'm sorry,' I told the manager, 'but there are no Christians here at St
Mary's Church.'

Marty, a little boy, was in church one Sunday with his mother Doris, when he started feeling sick.

'No,' his mother replied, 'the service isn't over yet.'

'Well, I think I'm about to throw up.' Marty announced.
'Then go out of the front door and around to the back of the church and throw up behind a bush.' said Doris.

'How could you have gone all the
way to the back of the church and returned so quickly?' Doris demanded.

'I didn't have to go out of the church, Mummy. They have a box next to the front door that says, "For the Sick" '.

The Long And Short of
Sunday Sermons 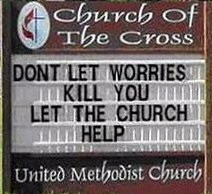 One Sunday a cowboy went to church. When he entered, he saw that he and
the preacher were the only ones present. The preacher asked the cowboy if he
wanted him to go ahead and preach. The cowboy said, 'I'm not too smart, but
if I went to feed my cattle and only one showed up, I'd feed him.'

So the minister began his sermon. One hour passed, then two hours, then
two-and-a-half hours. The preacher finally finished and came down to ask the
cowboy how he liked the sermon.

The cowboy answered slowly, 'Well, I'm not very smart, but if I went to
feed my cattle and only one showed up, I sure wouldn't feed him all the
hay.'

Bunny, a pastor, known for his lengthy sermons, noticed Ralph get up and
leave during the middle of his message. He returned just before the
conclusion of the service.  Afterwards Bunny asked Ralph where he had
gone.  'I went to get a haircut,' was the reply.

'But,' said Bunny the pastor, 'Why didn't you do that before the
service?'

Vicar Meets Congregation After the Sermon

"I really liked that stuff you were saying about all of us being sinners
and how we're damned for eternity."

A Prayer To Encourage A Fun Attitude

God, give me sympathy and common sense,
And help me home with courage
high.
God, give me calm and confidence
And please - a twinkle in my
eye.

An exasperated mother, whose son was always getting into mischief,
finally asked him, 'How do you expect to get into Heaven?'

The boy thought it over and said, 'Well, I'll run in and out and in and
out and keep slamming the door until St. Peter says, 'For Heaven's sake,
Jack, come in or stay out.'

Subscribe to Will and Guy's free 'Thought of the Day' email.

Footnote:
Please write to Will and Guy if you have any
funny Christian jokes.

•
What are the commandments?  •
Children's religious
stories   •
Home