Will and Guy's collection of jokes, one-liners and stories about children
and for children. 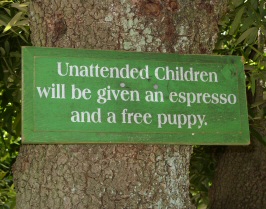 Bobby, nine, opened the big and old family Bible with fascination, and looked at the old pages as he turned them.  Suddenly, something fell out of the Bible, and he picked it up
and looked at it closely.  It was an old leaf from a tree that had been pressed in between the pages.

'Hey, Mum, look what I've found!'
Bobby called out.  'What have you got there, dear?'
his mother asked.
Astonishment written all over his face, he answered: 'I think it's
Adam's
suit!'

Old Goat?  Funny Story Out of the Mouths of Children

The young couple invited their aged Vicar for Sunday lunch.  While they were in the kitchen preparing the meal, the minister asked their son, what they were having.

'Goat?'
replied the startled man of the cloth, 'Are you sure about that?' 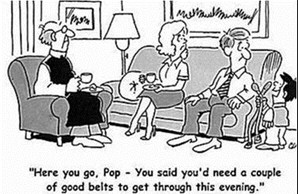 'Yep', said the youngster. 'I definitely heard Dad say to Mum, we might as well have the old goat for dinner today as
any other day.'

Butter would not melt in his mouth

What could the kid do to cause his
father physical pain and embarrassment?

A Year 5 teacher was giving her Primary pupils a lesson in developing logical thinking.

'This is the scene', said the teacher.

'A man is standing up in a boat in the middle of a river, fishing. He loses his balance, falls in, and
begins splashing and yelling for help.

His wife hears the commotion, knows he can't
swim, and runs down to the bank. Why do you think she ran to the bank?'

A little girl raised her hand and asked, 'To
draw out all his savings?'

What would you call the ghost of a door-to-door salesman? A dead
ringer.

What do skeletons always order at a restaurant?
Spare ribs!

Who was the most famous French skeleton?
Napoleon bone-apart

What runs around a cemetery but doesn't move?
A fence!

What do they teach at Witches school?
Spelling

Will and Guy's Philosophy on Funny Children's Jokes

We have stuck with our simple philosophy of collecting a mixture of clean, yet
funny jokes, interspersed with thought provoking pictures and the odd story.