The truth is that a cat in Santa Clara California really did discover how
to flush the toilet.  We know that the name of this cat is Gizmo and he
belongs to Nick and Scarlet.

Gismo was mesmerised by the toilet flush, and somehow discovered for
himself how to operate the lever.

Scarlet discovered Gismo's habit by accident.  One afternoon Scarlet
was as far as she knew, alone in the house.  Then the toilet flushed,
seemingly of its own accord.  When Scarlet discreetly investigated she
discovered that it was Gismo who was discharging the cistern.  Scarlet
had the presence of mind to record his procedure on camera.

Video EvidenceNow watch the video to solve the mystery!

How the Cat Flushing Toilet Story Was Exaggerated and Embellished

One (false) story doing the rounds

Ian and Sarah [not Nick and Scarlet] kept getting huge water bills
[fabrication]. They knew beyond a doubt
that the bills weren't representative of their actual usage, and no matter
how they tried to conserve, the high bills continued. Although they could
see nothing wrong, they had everything checked for leaks or problems; first
the water meter, then outdoor pipes, indoor pipes, underground pipes,
faucets, toilets, washer, ice maker, all to no avail.

One day Ian was unwell and stayed at home in bed, but kept
hearing water running downstairs [not true, it was the lady of the house who
discovered the cat's activity]. He finally tore himself from his sick bed to investigate, and stumbled onto the cause of such high water bills.

Apparently this was happening all day long when they were not
at home. Knowing that few would believe him, he taped a segment of the 'problem' for posterity.

The Story
Behind Smokey the World's Loudest Cat 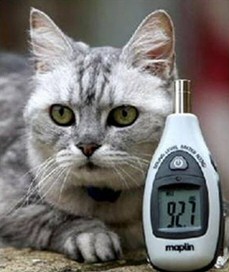 Smokey, a cat from Pitsford, Northampton, is the world's loudest cat.
She purrs at an astounding 92 decibels, nearly four times the volume of
your average cat.

Smokey's owners, Ruth and Mark Adams, are petitioning the Guinness Book
of World Records to formally recognize Smokey as the World's loudest cat.
So far, Smokey is unopposed, as the title is not held by any other cat;
that is, unless another extremely loud cat emerges to challenge Smokey.

A few other sounds that are around 92dB:

Note that 90-95dB is the threshold beyond which prolonged exposure can
cause hearing loss. That is a very loud cat. Smokey is not quite as loud
as a motorcycle, but she's pretty close.

Will an Guy Wonder - Could this Cat Gismo be a Witch's Familiar?

A witch's 'Familiar' is an assistant who helps a the witch by keeping a
lookout.  Another use of the 'Familiar' is so that the witch can move
un-detected, clearly that is not the case in this instance.  Will and
Guy's mischievous take on this cat flush story is that Scarlet is practising
her spells.