As W.C. Fields once said: 'Never give a sucker and even break'.

6) No. The Result is the same - mouse on top as usual.
What a weird cat

A cat chasing a mouse in Tirana's main power station caused a 72-hour
blackout across parts of the Albanian capital, the electricity company
reported last week, Will and Guy have learned.

'A cat and a mouse ran into the high-voltage cables,' a company
spokeswoman said, showing pictures of the electrocuted animals. 'We took
pictures because we've never had anything like this,' she added.

Albanians complain bitterly about the power cuts that have plagued them
for decades, and are mostly blamed on drought and the dilapidation of the
extremely old fashioned grid. 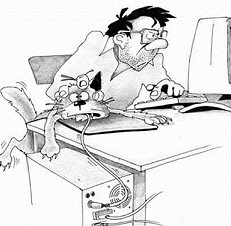 Amazing, Fascinating and Funny Look at a Cat with a Mouse

19-year-old Casey, from Potters Bar, Hertfordshire, England, was
photographing the leopard, named Sheena,12 years old, for a course project,
and he was astounded by the mouse's behaviour.

It was reported to Will and Guy that he said, 'I have no idea where the
mouse came from - he just appeared in the enclosure after the keeper had
dropped in the meat for the leopard. He didn't take any notice of the
leopard, just went straight over to the meat and started feeding himself.
But the leopard was pretty surprised - she bent down and sniffed the mouse
and flinched a bit like she was scared. In the meantime the mouse just
carried on eating like nothing had happened.

Even a gentle shove does not deter the little creature from getting his
fill.

'It was amazing, even the keeper who had thrown the meat into the
enclosure was shocked - he said he'd never seen anything like it before.'

Project owner Jackie James added, 'It was so funny to see.'  The
mouse continued to eat the leopard's lunch and s how the leopard who was the
boss.

Just goes to show that no one can push you around without your
permission.