This amusing and rather worrying story was reported on St David's Day, 2006 in the Huddersfield Daily Examiner and on BBC Radio 5 Live. for those of us who use car washes: BE WARNED.

A safety expert is demanding action after his car was damaged in a car wash. Richard Wrigley watched in disbelief as the boot of his red Jaguar got caught up in the mechanism of the drying machine at the car wash at Sainsbury's Shore Head supermarket. 'I looked in the rear view mirror to see this red thing and realised it was the boot of the car, 'he said.' The drying equipment had lifted the boot until it would go no further and crumpled it. I got out and left the driver's door open. I was looking for a stop button. The next thing I saw was my car door opening further. I tried to move the car forward, but the drier pushed the door open until it was at right angles to the car body.' He added, 'There was no way of stopping the machine and there are no safety instructions for drivers. Someone could have been badly injured. The machine didn't stop when it came into contact with the car boot, it just carried on its way.' Mr Wrigley, speaking on the radio, remarked that the latest quote to repair his door and boot was some £3000. He added, also, that his children who were with him in the car when this happened apparently thoroughly ' enjoyed' the adventure! 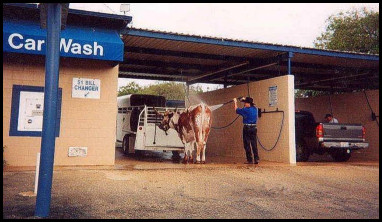 Only in Texas do they use the car wash for their prize cattle. I hate the outdoors. To me the outdoors is where the car is. Will Durst 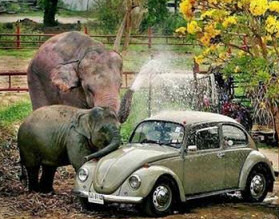 Elephants having fun with their 'Beetle' car wash. Footnote: Please send us your nominations for funny car wash of the year. Good, clean, free jokes.  One-liners, short funny jokes.  Have a laugh, enjoy a chuckle, bring a smile to your face.  Will and Guy hope that you share our sense of humour (or humor).